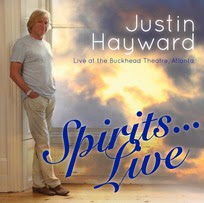 Recorded last August, the release was captured during the Hayward’s tour in support of recently released solo album Spirits Of The Western Sky – his first since 1996’s The View From The Hill.
The renowned Moody Blues guitarist/vocalist, joined by acoustic guitarist Mike Dawes and keyboardists/background vocalists Alan Hewitt and Julie Ragins, presented a set of 15 songs, selected from the new album and some Moodys favorites.
New tracks like “One Day, Someday,” “In Your Blue Eyes,” and “The Western Sky,” nestle comfortably between classics such as “Nights In White Satin,” “Tuesday Afternoon,” and “Question,” encapsulating Hayward’s long career as a songwriter.

Justin previously stated about the tour: “This tour will be something completely new for me. I'm bringing my 'song writing' guitars from home on the road for the first time. So this tour will have the feel and sound of my music room along with the vibe I was feeling as I wrote the songs.”

In addition to the full concert, the DVD and Blu-ray will also feature a Behind-The-Scenes featurette, allowing fans “backstage access” with Justin and his band.