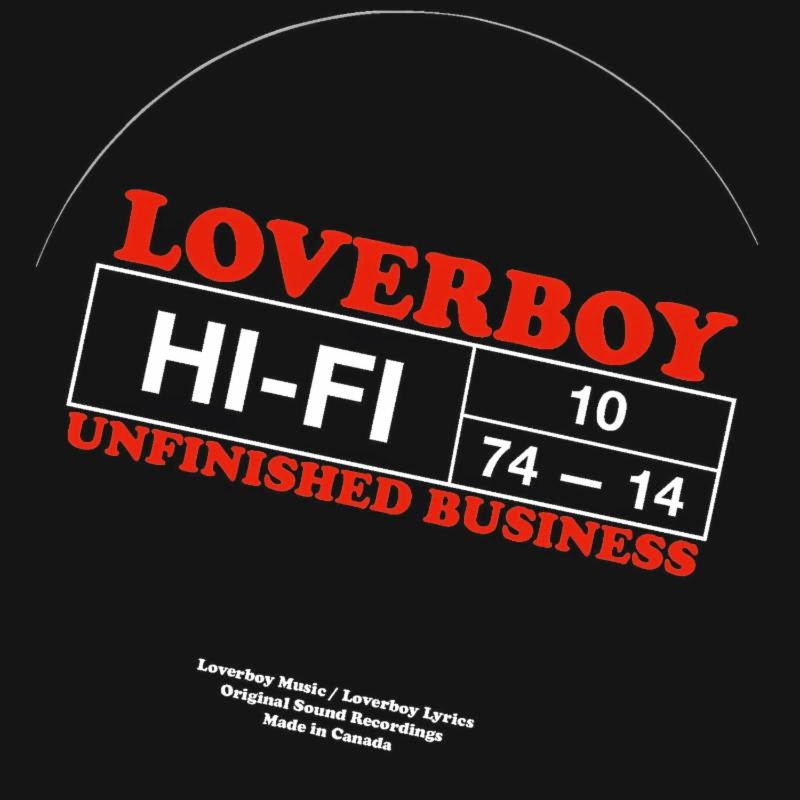 Unfinished Business is an apt title for the collection of recordings from multi-platinum rock band Loverboy - 10 songs waiting, some for decades, to be completed.

The recordings range from "Come Undone," written by Paul Dean while living in Toronto 40 years ago, long before he met vocalist Mike Reno and joined forces to form the group, to the Chuck Berry-influenced "Doin' It the Hard Way." The song was penned by Dean during a brief stint replacing Randy Bachman in Bachman-Turner Overdrive.

Completing the recording took Dean to Raleigh NC, home to drummer Matt Frenette, where they recorded the last three tracks in a friend's home studio. "We practically lived at Little Mountain Studios for six months (referring to the Lovin' Every Minute album sessions), but it's a new world. I do everything on my laptop now. Way better!" enthuses Dean.

"These are tracks we'd recorded over the years, and we just decided to complete them and release the album to show our appreciation to the fans who have supported us all this time," says Dean.

It will be released worldwide July 15 by Redeye Distribution on all major digital and brick-and-mortar retailers, while the first single "Counting The Nights" is available now.

The title came from Dean's idea to involve the band's fans in choosing the name of the album in a popular vote on Facebook, where the choices were first winnowed down to 10, decided by the most "likes." The band then chose Unfinished Business.

"No question, that was the one. We put the song titles up and explained that this album was 40 years in the making," says Dean. "It was a fun thing. Some of the titles they came up with were hilarious, but perhaps a little inappropriate for Wal-Mart."

Paul's initial idea - to give away the album for free - was nixed, but he's still encouraging fans to stream it on Spotify, Rdio, Beats Music or Deezer. "I have no problem with them doing that," he laughs.

Making the new album was inspired by the band's positive experience recording three new songs, two of them with their original engineer Bob Rock producing, at Bryan Adams' Warehouse Studios in Vancouver, for 2012's Rock 'n' Roll Revival. "It was, as usual, a great experience. Bob's a master."

The new album features "War Bride," a song Dean remembers playing only once live back in 1979 before the band had signed their first record deal with Columbia, and "You Play the Star" from the same period, which incorporates some of the classical influences keyboardist Doug Johnson demonstrated on his recent solo release. These two songs also feature the late Scott Smith on bass. "What an amazing player. It was really cool hearing him again. Scott had a great groove. And sound!!"

The release comes in the midst of a period of intense activity for the band, who are coming off being featured in highly visible ad campaigns for both Taco Bell and Radio Shack. Both national brands are using Loverboy's image and music to promote their products to the '80s generation, which grew up on the group, and others who are just being introduced to their anthems.

Radio Shack's Super Bowl commercial,  with the tag line, "The '80s called... they want their store back," saw some of that decade's most popular groups take over the retailer, set to a soundtrack of Loverboy's "Working for the Weekend." CNN praised the Super Bowl ad, calling it "pure commercial genius... a spot-on piece of creativity."

Then there's the widely-seen Taco Bell spot promoting their breakfast waffle taco, which features a prominent mention of a consumer "taking down his Loverboy poster" as part of an unabashed pitch to those who grew up in the '80s and are now smack in the middle of the desired advertising demo.

Loverboy is just as relevant today as they were three decades ago, delighting audiences around the world since forming back in 1979 when vocalist Mike Reno was introduced to guitar hot shot Paul Dean, both veterans of several bands on the Canadian scene, at Calgary's Refinery Night Club.

The band has four multi-platinum albums, including the four-million-selling Get Lucky, and a trio of double-platinum releases in their self-titled 1980 debut, 1983's Keep It Up and 1985's Lovin' Every Minute of It. Their string of hits includes, in addition to the arena-rock anthem "Working for the Weekend," such staples as "Lovin' Every Minute of It," "This Could Be the Night," "Hot Girls in Love," "Turn Me Loose," "When It's Over," "The Kid is Hot Tonite," "Heaven in Your Eyes" and "Queen of the Broken Hearts."

"I guess one day we'll have to stop calling the new album Unfinished Business," jokes Dean. "It sounds pretty much complete to me. And it only took us 40 years!"
Posted by newwavegeo at 5:18 PM