Brian Eno travels to new terrain on 'The Ship' 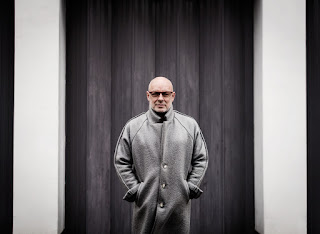 Check out the latest news from a press release on this musical innovator...

"Humankind seems to teeter between hubris and paranoia: the hubris of our ever-growing power contrasts with the paranoia that we're permanently and increasingly under threat. At the zenith we realise we have to come down again...we know that we have more than we deserve or can defend, so we become nervous. Somebody, something is going to take it all from us: that is the dread of the wealthy. Paranoia leads to defensiveness, and we all end up in the trenches facing each other across the mud.” - Brian Eno

The Ship, the new album by Brian Eno, will be released on April 29 via Warp Records. Eno’s first solo effort since 2012’s Grammy-nominated Lux, it was originally conceived from experiments with three dimensional recording techniques and formed in two, interconnected parts.

He explains: “On a musical level, I wanted to make a record of songs that didn't rely on the normal underpinnings of rhythmic structure and chord progressions but which allowed voices to exist in their own space and time, like events in a landscape. I wanted to place sonic events in a free, open space.

One of the starting points was my fascination with the First World War, that extraordinary trans-cultural madness that arose out of a clash of hubris between empires. It followed immediately after the sinking of the Titanic, which to me is its analogue. The Titanic was the Unsinkable Ship, the apex of human technical power, set to be Man's greatest triumph over nature. The First World War was the war of materiel, 'over by Christmas', set to be the triumph of Will and Steel over humanity. The catastrophic failure of each set the stage for a century of dramatic experiments with the relationships between humans and the worlds they make for themselves.

I was thinking of those vast dun Belgian fields where the First World War was agonisingly ground out; and the vast deep ocean where the Titanic sank; and how little difference all that human hope and disappointment made to it. They persist and we pass in a cloud of chatter.”

The album opens with the 21-minute eponymously titled “The Ship” with Eno’s cyclically sung sea-chant, snatches of distant voice and electronics.

“The poem read by Peter Serafinowicz was created by a Markov Chain Generator (software written by Peter Chilvers) into which we fed accounts of the sinking of the Titanic, some First World War soldiers songs, various bits of cyber-bureaucracy and warnings about hacking, some songs of mine, some descriptions of machinery, and so on. The Generator produced thousands of lines of text from which I extracted a few and then put them into this order," says Eno.

The album’s finale is a Lou Reed penned cover of The Velvet Underground’s “I’m Set Free”, a band who were famously credited by Eno as the inspiration behind his early music explorations as an art student.

“Written in the late '60s, Lou Reed's song 'I'm Set Free' seems even more relevant now than it did then. Perhaps anybody who's read Yuval Noah Harari's Sapiens will recognize the quiet irony of 'I'm set free to find a new illusion'...and its implication that when we step out of our story we don't step into 'the truth' - whatever that might be - but into another story.”

Coinciding with The Ship’s release, a series of Eno installations will be happening around the World at which you will be able to hear an alternative telling of The Ship in multi-channel three-dimensional sound installations. The impact of The Ship album will surely be felt long after these installations are ended; it signals yet another cycle in Eno's creative career.

“This album is a succession of interleaved stories. Some of them I know, some of them I'm discovering now in the making of them.” 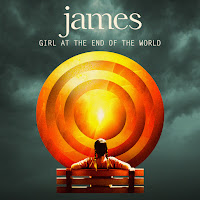 Here's the latest news on one of my favorite bands. Here's hoping they tour the U.S. this time for it...


UK band James has announced 14th studio album “Girl At The End Of The World” is scheduled for North America on March 18.

Two singles have been revealed: “To My Surprise” came last month (watch the official video here) and more recently, “Nothing But Love.” Both tracks are available now on Spotify, Amazon (CD, Vinyl & MP3) and on iTunes as part of a pre-order of “Girl At The End Of The World.”

“Girl At The End Of The World” sees the band team again with producer Max Dingel (The Killers, Muse, White Lies). James' current single “Nothing But Love” is a rarity in the James canon.
“Love songs tend to tread such a well-worn path that I avoid them unless I have something new to say or I’m so blinded by emotion I can’t help myself,” says singer/lyricist Tim Booth.
“It’s about love’s euphoria and ecstasy – that love-bomb that goes off and changes everything. But love is a high-stakes game, as something you love can also be lost,” he explains.

Like much of “Girl At The End Of The World,” the single was cut live in RAK Studio and it contains a touch of “Enoxification” from the band’s former mentor Brian Eno, who has produced five James albums.

James are both critically acclaimed and commercially successful, having sold over 12 million albums worldwide. The band originally signed to the iconic Factory Records in 1982, and have since gone onto produce a string of hit singles, including "Sit Down," "Come Home," "She’s A Star" and "Born of Frustration."
Pre-order your copy of “Girl At The End Of The World” here.

Bitch
To My Surprise
Nothing But Love
Attention
Dear John
Feet Of Clay
Surfer’s Song
Catapult
Move Down South
Alvin
Waking
Girl At The End Of The World
Posted by newwavegeo at 3:04 PM No comments:

On Saturday night, Boy George was introducing Culture Club’s first major hit “Do You Really Want to Hurt Me,” when he perfectly summarized what it meant to be a performer and music fan.

“We all have that song that starts the journey…I always feel vulnerable and raw singing this. It’s my favorite state of being and continues to resonate.”

Music purists often consider the Eighties to be a shallow decade. Key example: the Rock 'n' Roll Hall of Fame nominating committee, which has yet to acknowledge the importance of Depeche Mode, The Cure and The Smiths. Yet many artists most identified with that era are still going strong and influencing newcomers today.

Sponsored by iHeart Radio, in honor of its most popular app, the inaugural iHeart ‘80s Party assembled six pop, rock and alternative hitmakers for a high energy sold out concert and live simulcast at The Forum.

With 25-minute sets, everyone basically played wall-to-wall radio smashes. They kept the momentum going and easily prompted concertgoers to dance and sing along. Old music videos projected in the background allowed for interesting then-and-now viewer comparisons.

De facto headliner Culture Club provided soul aplenty, thanks to a large backing band consisting of female backing singers, a horn section and George’s own burnished vocals. “Church of the Poisoned Mind” was vibrant as ever. Afterward, George (currently filming American TV’s “Celebrity Apprentice” and “The Voice” UK) enthused, “what a beautiful atmosphere.”

An infectious “Miss Me Blind” was heightened by Roy Hay’s enthusiastic guitar solo and “Time (Clock of the Heart)” still sounded luxurious. After a gracious George thanked fans for continuing together on their long journey and feeling “palpable love,” the band did a spirited “Karma Chameleon.”

In Inglewood, his engaging performance started with rousing new tune “Light This Party Up.” From there, Springfield displayed impressive guitar (and flower smashing) prowess amid “I’ve Done Everything for You,” “Don’t Talk to Strangers” (including a foray into the crowd) and a ragged, but energetic “Love Somebody.” Some pyro was involved and Aussie teen sensation Cody Simpson played guitar on a fun “Jessie’s Girl.”

Black leather-clad Billy Idol lived up to the lyric of his opener “Dancing with Myself” and worked up quite a fist-pumping sweat. Side by side with longtime musical foil Steve Stevens (who played guitar behind his back), the fit and trim Idol prowled the stage and got close to the audience during “White Wedding,” the long version of “Flesh for Fantasy” and always menacing “Rebel Yell.”

Tears for Fears were professionalism personified and a clear standout among the lineup. An ebullient “Everybody Wants to Rule the World” immediately had people on their feet. “Sowing the Seeds of Love” was totally enthralling as Roland Orzabal pointedly stressed the final “politics of greed” lyric. Curt Smith’s dramatic gestures on “Mad World” added to the intensity. The high-flying harmonies of “Head Over Heels” and clanking synth-driven chants during “Shout” also went down a storm.

Both Loverboy and Missing Persons’ sets were bogged down by a muddy sound mix. Still, the former rocked hard and propelled the party vibe, thanks to the anthemic “Working for the Weekend,” racing “The Kid is Hot Tonight” and haunting “Turn Me Loose.”

Despite a lineup featuring The Knack’s Prescott Niles on bass, Missing Persons was shaky at best. Dale Bozzio – the bill's only female lead singer – seemed lost during “Mental Hopscotch” and “Words.” She later babbled incoherently before the spacey “Destination Unknown” and “Walking in L.A.”

Overall, the concert ran smoothly and was definitely a success.

My review originally appeared at ocregister.com
Posted by newwavegeo at 2:53 PM No comments: