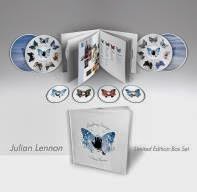 I was very impressed by the album. This sounds like an intriguing package...

Julian Lennon is set to release his first box set for Everything Changes (Music From Another Room, Ltd.), arriving Sept. 10.

The four-disc set includes three selections off his same titled recent studio release, including studio, acoustic and instrumental versions as well as the documentary, Through The Picture Window.

This set will include a 36-page booklet and a two-picture vinyl disc set, as well as a limited edition run of 1000 will be numbered and include a signed certificate from Lennon. Pre-order of the signed UK import version is available now through recordstore.co.uk for 99.99 (British pounds).

Julian Lennon has spent the past two years on a global promotional tour in support of Everything Changes, amidst multiple photography exhibits including Art Basel in Miami, Morrison Hotel Gallery in both Los Angeles and New York, Little Black Gallery in London, and more.

He spent last summer as the still photographer on the set of the forthcoming Eileen Gray biopic, Price of Desire, and in December, Lennon embraced the world of technology with an App, Through A Picture Window, a new way to deliver his art to fans including his latest works in an audio, film and visual interactive format.

Julian Lennon’s sensitive and poetic vision of life courses through his exquisite photography, philanthropic pursuits, and his acclaimed music. His 1984 debut LP, Valotte (Atlantic), yielded two top ten hits—the title track and "Too Late for Goodbyes”—and was Grammy nominated for “Best New Artist.” He went on to have multiple #1 singles on the U.S. album rock charts.

Internationally, one of his most popular songs “Saltwater” charted successfully around the world, topping in Australia for four weeks and reached #6 in the UK. In 2007, Julian founded the global environmental and humanitarian organization The White Feather Foundation. He produced the compelling documentary whaledreamers that was shown at the 2007 Cannes Film Festival and earned 8 International Film Festival Awards. He has emerged a renowned photographer and garnered many outstanding reviews for his iconic images.

Then in June 2013, he returned with his first album in 15 years, Everything Changes.
julianlennon.com
Posted by newwavegeo at 7:29 AM

Julian Lennon is a Brilliant multi-gifted artist who is changing the world into a better place one step at a time. His Album "Everything Changes" is a Masterpiece & is living proof of the peace and love he brings to the table. He has a spiritual vision that is right & just & his eye for photography takes his work to Another level! He is unique and Stands on his Own! Don't hesitate, this magical set will bring years of joy &
happiness and contribute to Julian's path of hope, peace, love, & healing for all. WTG Julian! <3