The Waterboys go 'Where The Action Is ' in May 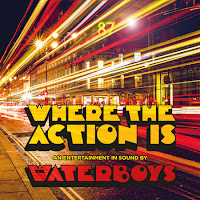 On May 24, The Waterboys will release the new album Where The Action Is via Cooking Vinyl.

Its title inspired by the chorus of Robert Parker’s 1960s mod/Northern soul classic "Let's Go Baby", Where The Action Is is a 10-song, genre-defying album by founder and front man Mike Scott.

Over the past four decades, his songs have been covered and/or recorded by artists including Prince, who crafted two different arrangements of Scott's classic "The Whole Of The Moon", Rod Stewart, Tom Jones, Steve Earle, and Ellie Goulding, who had a number three hit in 2013 with "How Long Will I Love You".

The title track’s update of the Parker classic features longtime member Steve Wickham on his fiddle and female vocals from Jess and Zeenie. "London Mick" is a tribute to Clash guitarist Mick Jones. "And There Is Love" is a collaboration with English producer Simon Dine (Paul Weller).

Where The Action Is also features a song called "Out Of All This Blue", the title of the last album. Recorded for that record, but not finished, Mike revisited it last year with some changes of style.

Two closing songs are inspired by towering literary figures. "Then She Made The Lasses-O" is based on Robert Burns’ poem Green Grow The Rashes-O and the album’s final track is "Piper At The Gates Of Dawn".

Where The Action Is will be available on CD, Deluxe 2xCD, LP, digital download and streaming services with Exclusive bundles also available from the Official Store.

Pre-order Where The Action Is HERE

1. Where The Action Is
2. London Mick
3. Out Of All This Blue
4. Right Side Of Heartbreak (Wrong Side Of Love)
5. In My Time On Earth
6. Ladbroke Grove Symphony
7. Take Me There I Will Follow You
8. And There’s Love
9. Then She Made The Lasses-O
10. Piper At The Gates Of Dawn