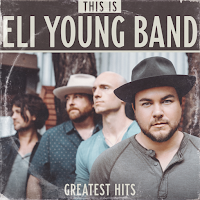 This is Eli Young Band: Greatest Hits is available now via The Valory Music Co. The new track “Love Ain’t” is on the cusp of Top 10 at Country radio. The band chatted with fans online prior to the release of their Vevo official live performance of the “Where Were You” Video Premiere, filmed last month at the New York City headquarters. Watch Here: https://youtu.be/6POlvF4aN5Q.

"Those kids in that garage band we started out as wouldn’t have expected we would be where we are now, and what is still ahead of us. Fans from day one, and fans jumping in to discover us now – you are, as cliché as this sentiment can be, making all of it possible," shared EYB on Instagram. "This album brings the songs you love most to one place! Thankful for the past, and excited for the future. We hope you will turn it on, up, and sing along."

Revisiting their early days on the road when many of their signature tracks were created, EYB compiled a playlist titled “Songs From the Van” for Billboard and “features both superstar rockers (Queen) and introspective singer-songwriters (Marc Broussard), all of whom put an emphasis on harmonies and instrumentals the way Eli Young Band does.”

Collectively sharing the theme, EYB recalls, “Although these are all songs and artists that have influenced our music, these more specifically capture a moment in time for us when it was just the four of us – in a van – taking on the world one small stage at a time.” Listen to EYB’s picks here.

Formed at the University of North Texas, EYB’s journey features #1 hits PLATINUM "Drunk Last Night,” 2X PLATINUM “Even If It Breaks Your Heart,” and 3X PLATINUM “Crazy Girl.” Globally, they have racked up over 2.8 billion in streams. EYB has headlining and festival shows slated through the summer. For a full list of tour dates and more, please visit https://eliyoungband.com/ and follow them on Facebook, Twitter and Instagram.MORE ABOUT ELI YOUNG BAND:

Eli Young Band has always been unique in modern Country music – a true band who plays their own instruments and writes their own songs. Gravitating towards titles with lyrical twists – No. 1 hits: PLATINUM "Drunk Last Night,” 2X PLATINUM “Even If It Breaks Your Heart” and 3X PLATINUM “Crazy Girl” – EYB recorded the Ross Copperman, Ashley Gorley and Shane McAnally-penned track alongside producer Dann Huff.

The latest offering follows their album FINGERPRINTS. EYB’s career has also seen the chart-topping 10,000 TOWNS with singles earning Billboard’s #1 Country Song of the Year and ACM Awards Song of the Year.