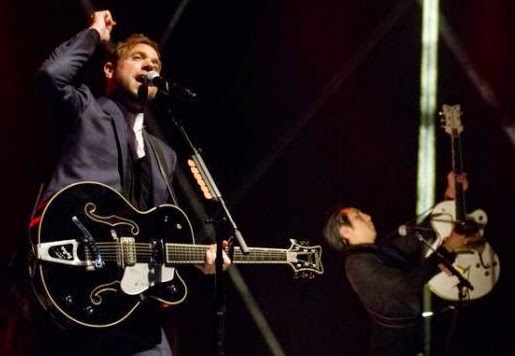 A version of my review originally appeared at ocregister.com

For a band that regularly tours nationally like The Airborne Toxic Event, being back on home turf provides an extra spark. Barely one song into the popular Los Angeles quintet’s exhilarating 95-minute set at the Greek Theatre, leader Mikel Jollett exclaimed, “Isn’t it great to be alive?!”

Indeed, the swelling alt-rock music, elevated by Anna Bulbrook’s violin and Steven Chen’s inventive guitar work (not to mention their keyboard tradeoffs), frequently provides a sense of grandeur a la early Arcade Fire. Those elements have helped TATE rack up a half dozen modern rock radio hits since ’08 and appearances at  Coachella and KROQ festivals.
Thursday night, the musicians had friends and loved ones in tow. Chen even brought his dog along (!) and was seen trotting the animal through the VIP section.
Tellingly, the pre-show music included Queen & David Bowie’s “Under Pressure.” Hearing an a capella version of the 1981 pop hit inspired Jollett to step up his musical game on upcoming fourth album “Dope Machines.” The self-produced effort, which the front man recently described as “the weirdest we’ve ever made,” is due in 2015 on Epic Records.
Fans got a taste via the enticing, danceable first single “Wrong,” featuring electronic drums and percolating synth lines. Onstage, Jollett dismissed initial public reactions questioning whether TATE was still a rock band. 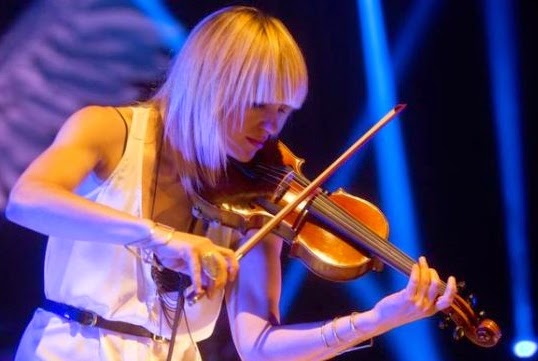 He introduced “California,” another promising new track, by sharing how when they go around the country and people find out the band is from LA, he often gets asked about movie stars.
Featuring a beautiful Bulbrook violin intro, echoed drums and group backing vocals, the tune found Jollett singing, “we’re all stuck in the same scene/all nightmares and daydreams” and dancing “in the glow of the Hollywood Freeway light.”
With a large white eagle perched behind the instruments, an obviously happy Jollett initially walked out for “All At Once” hoisting a wine glass and later expressed disbelief about playing the Greek. The band immediately got the crowd excited with the jaunty “Gasoline” and stomping “Changing.”
Much of the 19-song set was culled from the group’s eponymous 2009 debut CD. New bassist Adrian Rodriguez acquitted himself well live (he replaced founding member/co-songwriter Noah Harmon, who was fired earlier this year for unspecified reasons). Despite the band’s concert cancellation in Rhode Island a few weeks ago due to Jollett’s laryngitis, there were no problems in LA.
Sporting fuzzy guitars, Moog and gang vocals, “Hell & Back” (from the “Dallas Buyer’s Club” soundtrack) was a standout. Jollett interacted with his bandmates several times and made plenty of connections with fans standing in front by leaning or jumping into the crowd. Bulbrook got into the action with a brief bit of crowd surfing.
Before the searing rocker “Wishing Well,” he reminisced about writing it “just down the hill on Vermont Avenue. The neighbors used to yell at me because I played it all day long. It’s the first song we played as a band at The Echo” down the way. Elsewhere, big hit “Sometime Around Midnight” was regal as ever and Bulbrook’s violin playing got a welcome spotlight on the frenzied “All I Ever Wanted.”
Come encore time, a captivating stripped down segment included “The Graveyard Near the House” (off 2011’s excellent “All at Once”) and the waltz-like “Elizabeth,” charming “Bride & Groom” (about Jollett’s parents). All contained a lovely male/female vocal blend.
Then the band pulled out all the stops for the frenetic “Does This Mean You’re Moving On” and epic closer “Missy” as an ever-gracious Jollett talked about dreams coming true. They segued into frequently played covers of The Cure’s “Boys Don’t Cry” (the melody sounded amazing on violin) and Bruce Springsteen’s “I’m on Fire” before circling back to the main tune.
Opening the concert was Twin Shadow, led by George Lewis Jr. Clad in a black leather jacket (sans shirt) and bike shorts on a chilly evening, the singer/guitarist’s smoldering chillwave and indie rock sounds went over well with the crowd.
An especially loud cheering section yelled “we came for you.” Taking advantage of a generous 55-minute stage allotment, the Dominican Republic-born Lewis previewed several new songs from his forthcoming third album. The set highlight was a soulful “Run My Heart” from 2012’s “Confess,” where Lewis added a few lines of Sade’s “No Ordinary Love.”
The Airborne Toxic Event
Setlist: All at Once/Gasoline/Changing/Happiness is Overrated/Something New/Hell & Back/California/What’s in a Name/Safe/Numb/Wishing Well/Wrong/Sometime Around Midnight/All I Ever Wanted
Encore: The Graveyard Near the House/Elizabeth/Bride & Groom/Does This Mean You’re Moving On/Missy>Boys Don’t Cry (The Cure)>I’m on Fire (Bruce Springsteen)
Photos by Drew A. Kelley
Posted by newwavegeo at 5:14 PM