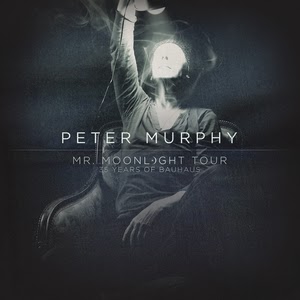 Peter Murphy just released a live DVD from his Mr. Moonlight Tour – 35 Years Of Bauhaus, which was filmed in Los Angeles this past summer at the Fonda Theatre.

It offers an unmitigated recounting of the band’s rapid rise to fame and glory in the late 70s, their sudden dissolution in the 80s, and their subsequent—and often contentious—reunions. Where it is germane, Haskins also touches on his work with Love And Rockets and various other collaborators and delves deep into his exploration of the occult.


Feedback:
Fast, compelling, and disarmingly honest, this is an invaluable account of a strange and spectral cultural twilight era that we shall almost certainly never see again. Highly recommended.
-Alan Moore, Author of Watchmen

Bauhaus was…one of the reckless few that created such an important and unusual genre of music. Their odd, witchy songs snaked themselves all the way from whence they came into my temporal lobe and impacted on what I ended up becoming as an artist.
-Marilyn Manson