Reissues of first two Jellyfish CDs due in January 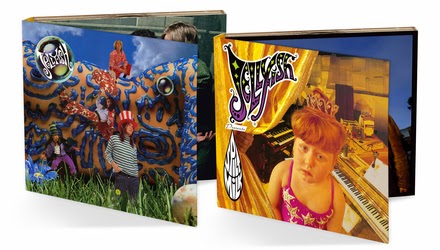 Exciting news this morning about a much missed 1990s band. Can't wait to hear these. Read on for details...

Indie pop-rockers Jellyfish only released two albums in their short existence.
Following Omnivore Recordings' vinyl reissues of those titles in 2012, three never-before-available albums — Live at Bogart’s, Stack-a-Tracks, and Radio Jellyfish —helped keep the legacy alive.
The story now comes full circle with the expanded deluxe CD editions of Bellybutton and Spilt Milk, available from Omnivore on Jan. 20 in North America. Both titles have been expanded to two discs and include the original albums in their entirety fortified with 51 bonus tracks spread among the packages.
With tracks from the demos to the albums to the tours, these releases are the ultimate Jellyfish experience.
Jellyfish’s 1994 debut, Bellybutton, has been remastered for the first time for the deluxe reissue. The full-length is joined on the first CD of the set by ten live performances recorded during that album’s tour. These tracks include Jellyfish originals, as well as covers of songs from Paul McCartney & Wings and The Archies.
The second disc of the set is composed of demos — nine that would end up on Bellybutton and one eventually recorded for Spilt Milk, as well as others of which studio versions were never cut, and a cover of Donovan’s “Season of the Witch.” This disc will also be available digitally worldwide as The Bellybutton Demos on the same date.
Follow-up Spilt Milk is also treated to a remastering, with the first disc adding eight demos of songs considered for, but not recorded for the release. The second disc contains demos for the album tracks, four live performances from the tour, the last studio recording from the band (a cover of Harry Nilsson’s “Think About Your Troubles”), and a special message from Jellyfish recorded in the studio during the album’s creation and originally sent to fan club members.
Both releases feature expanded artwork with photos and memorabilia. Essays from Ken Sharp incorporate new interviews with Andy Sturmer, Roger Joseph Manning Jr., and Jason Falkner from Jellyfish, as well as the albums’ producers. Sturmer and Manning also provide track-by-track commentary on the original album tracks.
According to the band’s Roger Joseph Manning, Jr., “It's so great to have both albums remastered and available again. We know that the fans have been looking for the tracks that only appeared on a long out-of-print boxed set, so many of those outtakes, demos and live tracks have been added to make these expanded deluxe two-CD sets as comprehensive as possible.”

Watch the Jellyfish trailer here: http://youtu.be/fIuJylga2FI
Posted by newwavegeo at 11:37 AM