Boz Scaggs returned to the Fox Performing Arts Center for the second time in less than a year on Thursday night.

The 90-minute performance mixed selections from solid 2013 album Memphis with some of his biggest pop hits from the mid-1970s-to-early-'80s.


For Memphis, the Grammy-winning singer/guitarist tackled songs by Al Green, Steely Dan, Jimmy Reed and others alongside such notable session musicians as drummer Steve Jordan (Keith Richards, John Mayer), bassist Willie Weeks (George Harrison, Donny Hathaway), guitarist Ray Parker Jr. (Rod Stewart, Smokey Robinson), keyboardist Spooner Oldham (Neil Young) and the Memphis Horns. Jordan also produced it.
The Riverside, Calif. concert opened with the chugging blues of "It All Went Down the Drain" from 1997's Come on Home. When Scaggs and his six-piece band did a supremely soulful cover of Willie DeVille's "Mixed Up, Shook Up Girl," the Memphis highlight also became the first one this evening too.
Moving from electric to acoustic guitar and seated for a brief spell, Scaggs - now 70 - did Tony Joe White's "Rainy Night in Georgia" in relaxed fashion. Here, he was aided by quiet piano and keyboard triggered strings. The self-penned slice of sublime R&B, "Gone Baby Gone" immediately followed. Traditional number "Corrina Corrina" boasted a peppier arrangement than the ballad version heard on Memphis.
Scaggs let the music do most of the talking, with just a couple simple songwriter introductions. Conversely, a group of chatty concertgoers in the orchestra section wouldn't quiet down. More attentive fans instantly cheered the opening notes to a jazzy "Harbor Lights."
Saxophonist Eric Crystal really shined on "JoJo" and let impressive backing vocalist Conisha "Ms. Monet" Owens do the heavy lifting. She stole the spotlight with some vamping on a buoyant "Miss Sun" and got it all to herself amid a fun version of the Isley Brothers' "It's Your Thing." That finally got the crowd up and dancing and engaging in some call and response vocal action.

Later, "Lowdown" gave the players a chance to take brief solo turns and "Lido Shuffle" still had plenty of kick. For the encores, Scaggs played the sleek R&B of "What Can I Say?" - another track off his quintuple platinum 1976 LP Silk Degrees - and the 15-minute blues excursion from 1969, "Loan Me a Dime." 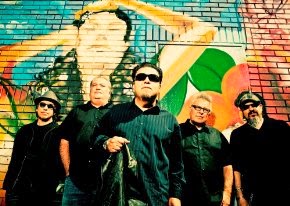 Launching the Fox proceedings was Chicano rock mainstay Los Lobos, whose 65-minute set frequently sizzled and went down a storm with the Riverside crowd.
The East LA sextet dedicated their stage time to legendary blues guitarist Johnny Winter, who died the day before. "We're gonna miss that man," said co-lead singer/guitarist Cesar Rosas, after the fiery blues of Sonny Boy Williamson's "One Way Out." During the epic rollicking groove of "That Train Don't Stop Here," Rosas reiterated they were "sending love" Winters' way.
Still focused on 1992's Kiko, the band locked tightly into the moody ambience of that album's title track. "We got a soulful thing going on," noted Rosas, who also teasingly asked everyone if they wanted to hear "La Bamba" yet.
Instead, the group engaged in some fine rock 'n' roll, including "I Got Loaded," a jaunty "Don't Worry Baby" (where ultra cool sax man Steve Berlin displayed why he's been such a sought after studio musician for decades) and finally, Richie Valens' "La Bamba" segued into an ebulliant take on the Young Rascals' "Good Lovin.'"
Posted by newwavegeo at 3:19 PM