Better Than Ezra debut to get reissued 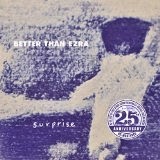 Liaison Records will release the 25th Anniversary Edition of Better Than Ezra's first studio album, Surprise on Aug. 19. Originally released on cassette only in 1989 by Swell Records, it has been commercially unavailable for over two decades.

Watch the lyric video for the first single, "Circle Of Friends"  on YouTube: http://youtu.be/l7EyZxRmFbY. It is also available for download on iTunes & Amazon.

Newly re-mastered, Surprise is the only Better Than Ezra album to feature all four original members -- Kevin Griffin (vocals, guitar), Joel Rundell (guitar), Tom Drummond (bass) and Cary Bonnecaze (drums).
Better Than Ezra formed in 1988 by Kevin Griffin and Cary Bonnecaze while attending LSU in Baton Rouge. With the addition of Joel Rundell and Tom Drummond, they moved into a house together and began focusing on writing their own songs which they would perform live and ultimately release on their debut studio album.

Cary recounts, "We recorded Surprise in a garage studio (literally) during the evenings and after classes, in the course of five days. Once we had the cassettes made, we approached a local record store off the LSU campus to sell the album and within days it became their biggest selling album.  We played bars and frat shows throughout the Southeast and sold Surprise wherever we could. Things seemed to be going well. Little did we know that within that year our world would change forever.”

On August 8, 1990, after playing a show at Murphy's Bar in Baton Rouge, Joel unexpectedly passed away. There is nothing like losing someone who you genuinely love and care for. It wasn't ‘like’ losing a brother, we did lose a brother. This 25th Anniversary release is dedicated to Joel.”

Continuing as a trio, Better Than Ezra released their second  album, Deluxe, in 1993 on Swell Records. In 1995, Elektra Records re-released it and the single, "Good,” which helped push the album to platinum status by the end of 1995.

As Surprise celebrates its 25th anniversary, Better Than Ezra has gone on to scan nearly two million albums in the United States.
Posted by newwavegeo at 3:31 PM