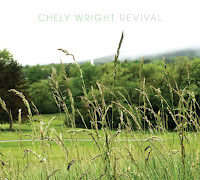 Over the past decade—on projects like 2010’s Lifted off the Ground, produced by Rodney Crowell, and 2016’s I Am the Rain, produced by Joe Henry—singer-songwriter and LGBT activist Chely Wright had used her songwriting as a salve to soothe the emotional turmoil that accompanied her extraordinary journey from Nashville star to introspective storyteller.

Her latest EP Revival is something different. “The fractured state, the fissures that defined me—that was what my records were about, without my even knowing it,” Wright says. “I’m not as broken as I used to be. I can be so happy right now, and I can sing about being happy. Or I can have a lousy day and I can sing about that. Or I can talk about how hard marriage is. All that’s OK.”

The songs were co-produced and co-written by Jeremy Lister and multi-instrumentalist Dustin Ransom.

Wright explains that they made a point of not letting her veer too close to the tones and themes of her previous music. “Jeremy and Dustin steered me toward narratives that celebrate this idea of, ‘You’re actually the best you’ve ever been as a human.’ That was news to me,” Wright says. “They were able to see, ‘This is a woman who is ready to celebrate where she is at the age of 48. I loved that.’”

On Wright-Lister songs like the duet “Say the Word” and the title track, Wright said she thought "about past relationships I’ve had, and they will never leave me. It’s something my wife, Lauren, and I talk about a lot.

"Those women will be a part of our current relationship, because they helped form who we are. ‘Revival’ is about forgiveness."

“The song also speaks to a hope that I know I’m missing right now,” Wright adds. “I wake up and I’m feeling hopeless about a lot of things in the world and our government, in our public discourse. I like that that song stakes a claim on humanity and healing.”

Wright emerged on the national country-music scene nearly three decades ago. She earned her first major-label deal in 1993; the Academy of Country Music’s Top New Female Vocalist Award in ’95; and her first Top 40 country hit, “Shut Up and Drive,” in ’97. In 2010, Wright released her Random House memoir, Like Me: Confessions of a Heartland Country Singer, and forever altered the social landscape of Nashville. In the end, her identity as both an artist who embodies country music’s core values—a dedicated person of faith and a patriot, Wright was playing for the troops long before most artists considered doing it—and a strong gay woman made her an ideal catalyst for changing hearts and minds.

Currently based in New York City, Wright is now able to convey the entirety of her journey on her terms exclusively. “That’s my view now—the long game,” she says. “As far as touring, I love it more than I ever loved touring before. I have a lot of stories to tell.”