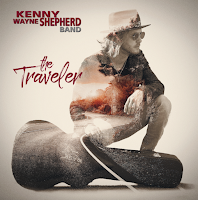 More than 20 since his debut album was released, Kenny Wayne Shepherd continues to top the charts. Kenny Wayne Shepherd Band’s The Traveler (Concord Records) debuted at #1 on the Billboard Blues chart and #1 on the Americana/Folk chart this week. It is also #3 on Top Current Rock Albums, in the Top Ten on Current Physical Albums and Top Current Albums charts, and debuted in the Billboard 200.

This is Kenny’s ninth album to hit #1 on the Billboard Blues chart. A new recording of Kenny’s break-out single “Blue On Black,” originally released in 1997, is also currently #1 on the Mainstream Rock Songs chart. The new recording features Kenny, Five Finger Death Punch, Brian May, and Brantley Gilbert, with all proceeds going to the Gary Sinise Foundation in support of First Responders.

Shepherd and Hunt recently performed a live session for Paste Magazine and sat down for an intimate Q&A in front of a live audience in NYC last week as part of the Backstory Events series, streamed by Guitar World.

Kenny Wayne Shepherd Band will also be touring from June-August, including several co-headline shows with Buddy Guy. Full itinerary is below.