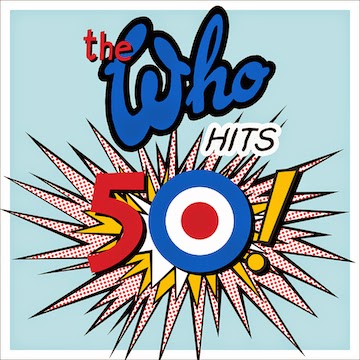 Alongside The Beatles and The Rolling Stones, The Who complete the holy trinity of British rock bands that have the honor of celebrating their landmark 50th Anniversary.

Who Hits 50! is the definitive collection of the band’s greatest tracks from their very first recordings as The High Numbers right up to the present day with the new track “Be Lucky.”

Released Oct. 27 on Geffen/Universal Music Enterprises (UMe), Who Hits 50! coincides with the band’s 50th anniversary tour of the same name, which starts in Dublin on Nov. 26 (see dates below)

In keeping with their ongoing support for Teenage Cancer charities, the band have donated their royalties from the new song to Teen Cancer America, a charity founded in 2011 by Roger Daltrey and Pete Townshend.

Concert tickets for The Who go on sale to the general public on Friday, October 17 at 10:00 AM (local time) at thewho.com

Citi cardmembers will have access to purchase presale tickets for the U.S. dates beginning Monday, Oct. 13 at 10:00 AM through Citi’s Private Pass Program.

The show--described by Pete Townshend as--“Hits, Picks, Mixes and Misses” will see the band play all their classic anthems as well as tackling deeper cuts from their catalog.

“This is the beginning of the long goodbye,” says Roger Daltrey of the upcoming tour.

Pete Townshend commented, “Trying to stay young. Not wearing socks. Growing a great big Woodcutter's beard. Might even wear a check shirt on stage and get a tattoo of a Union Jack. Always a fashion victim. But under no illusions. We are what we are, and extremely good at it, but we're lucky to be alive and still touring.”