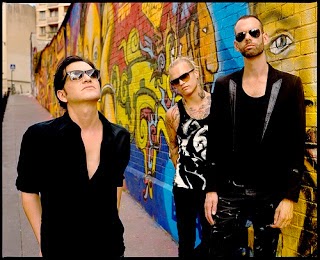 Placebo wraps up a brief North American tour – the first since 2007 – on Friday at Club Nokia in Los Angeles.

Last year, the London based alt-rock band put out its acclaimed seventh album Loud Like Love via Universal Music Enterprises.

A success throughout Europe and Asia, it reached the top five in 10 countries, including a few No. 1 entries.

In a video interview accompanying the latest album’s release, Brian Molko said that the lyrics this time around touched upon addiction and social media, but that he wrote about people rather than those specific things. Essentially, the singer/guitarist concentrated on relationships and how people relate to each other.

“First track ‘Loud Like Love’ is sort of celebratory, but then it gets dark from track 2, onwards. I think we’re just attracted to melancholy and dysfunction in general. It’s more interesting to write about.”

The unusual, riveting music video for first single “Too Many Friends” was directed by Saman Kesh and features narration by American author Bret Easton Ellis (Less Than Zero, The Rules of Attraction, American Psycho).

Provocative as always, highlights amid the solid collection include a haunting “Exit Wounds,” an intriguing, Radiohead-esque “Begin the End” (which clocks in at six minutes and finds Molko calmly signing, “knock me off my feet like heroin”), the dramatic, string-laden “Bosco” and propulsive title track.