Melissa Etheridge concluded her summer solo acoustic tour in Riverside, Calif. on Sunday night and made it extra special for fans.

The two-hour concert, held at the Fox Performing Arts Center, was so warm and inviting that it was almost like sitting down for a coffee with the rock singer/guitarist. Coming right on the heels of Etheridge’s next studio album This is M.E., set for release Sept. 30, the excellent show featured guest Neyla Pekarek from The Lumineers on cello and backing vocals for two of the new songs.

This is M.E. includes more experimental music and collaborations with a different crop of writers than usual. It was co-produced by Mark Batson (Dave Matthews Band, Grace Potter & The Nocturnals), Jon Levine and Jerrod Bettis. First single “Take My Number” is at radio now.

Various guitars were lined up on one side of the Fox stage. The other had a grand piano and a couple of handheld drums that Etheridge manually used to loop a backbeat for each song. Lava lamps and scarves draped around everything added to the cozy vibe.

Clad in a black top and shiny silver pants, Etheridge strolled onstage and began the 14-song set strumming an acoustic guitar for a rousing “Bring Me Some Water” (her Grammy nominated top 10 AOR radio hit from 1988) and did some gritty vocals.

Taking a poll of which fans hailed from Riverside and beyond, Etheridge marveled at the magnificence of the Spanish Colonial Revival style Fox building, built in 1929. She reminisced about how she used to play a Pomona lesbian bar in the 1980s before landing a recording contract and how even back then the freeway drive from Long Beach was killer.

Before creating a rhythm for pleading love ballad “Mercy,” the artist affirmed that all the music would be “natural and organic,” meaning nothing was pre-programmed. An earthy “Don’t You Need” had a quiet intensity and found her playing harmonica, then layering electric guitar on top of the acoustic.

Longtime enthusiasts probably tried to guess which song would come next by the drum beats Etheridge crafted, but it wasn’t easy. Grabbing a double neck guitar, she proceeded to do the slinky riff rocker/title track off 1989’s Brave and Crazy. 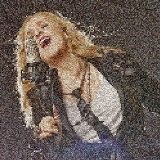 Pekarek added subtle cello to the riveting new ballad “Who are You Waiting For,” which Etheridge originally penned for her marriage vows last spring to Linda Wallem in Montecito, Calif. Performing on the piano with vocals nearly whispered, you could almost hear a pin drop in the venue.

The spirited “A Little Hard Hearted” found Pekarek providing wordless counter vocalization. Etheridge performed on acoustic guitar and wailed away. “Every time I play this, it makes me happy,” she admitted before doing hit single “Come to My Window.” Always electrifying live whether she’s with a band or not (the same held true of “I Want to Come Over” later in the set), fans sang along loudly to the seductive empowerment lyrics and gave a standing ovation.

Returning to the piano for stark Joan Armatrading cover “The Weakness in Me,” Etheridge said she used to play it at that Pomona club and then humorously added: “I also used to play Juice Newton’s ‘Queen of Hearts’ there and some guy had a heart attack. He was the only one there. It’s true!”

Another strong new track, “Monster” was driven by swampy slide guitar work and harmonica (on the album, it contains soulful female backing vocals).

Finally, she implored fans to go “spread some joy this week” and did a brawny, extended “I’m the Only One,” totally belting the vocal. Come encore time, Etheridge played frequent concert closer “Like the Way I Do.” Giving it a passionate delivery, she vigorously strummed an acoustic guitar for the 10-minute epic.