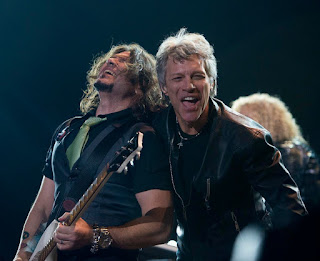 The title track to current Bon Jovi album “This House is Not for Sale” opens with the line “these four walls have got a story to tell,” which refers to the band’s three original members.

During a packed Forum show on Wednesday night, front man Jon Bon Jovi told a few of them.

One about their history with the legendary venue was the most interesting. “We woke up in the parking lot,” he recalled, to debut as opener for The Scorpions in 1984. Five years later, Bon Jovi would sell out consecutive nights there on the backs of multi-platinum efforts “Slippery When Wet” and “New Jersey.”

“We stayed on the Sunset Strip. One day, my girlfriend and I were in bed and we decided to elope to Vegas.” When grunge music became popular, Bon Jovi’s fortunes waned and they returned to a half-filled Forum (where this writer first saw the group live) in ’93. “I thought it’s over; we’ll never play The Forum again and I literally cried. Twenty-four years later, it’s been a bumpy road.”

Co-produced by longtime collaborator John Shanks, “This House is Not for Sale” debuted at No. 1 in 2016. Another fine effort ­­­from the superstar Jersey natives, it frequently sports a harder rock edge than recent efforts, thanks to Shanks and lead guitarist Phil X (who recorded with Bon Jovi for the first time after replacing Richie Sambora).

To coincide with the tour’s launch last month, Bon Jovi put out a nifty career-spanning LP box set through Island/Universal Music that is housed in a replica road case. It includes every band and solo album, plus a couple rarities collections. Many were never issued on vinyl before. Fans can also immerse themselves in “Bon Jovi: The Story,” by Bryan Reesman, an interesting new coffee table book filled with archival photos and background history.

Before the quintet – augmented by guitarist/backing vocalist Shanks and percussionist Everett Bradley - appeared onstage, an American flag was projected on a scrim. The image cleverly morphed into a highway lane stripe, then eventually became a picture of the Forum and new album cover structure. 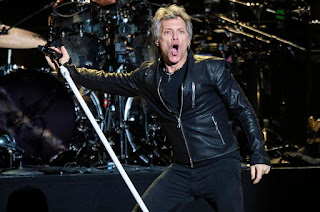 Clocking in just over 2 ½ hours, a good chunk of the 24-song Inglewood set came from “This House.”

Halfway through, two new tunes were highlights: plaintive ballad “Scars on This Guitar” (a loving ode to the instrument co-written by country hitmaker Brett James) and the highly personal “God Bless This Mess,” where Jon Bon Jovi sings “My voice is shot/I’m going grey/These muscles all ache/Don’t cry for me/I’m the life of the party.”

That sentiment was partially true here. Jon Bon Jovi’s vocals were mostly subdued and after straining at the high notes on melodramatic hit “Always,” he noted the song was hard to do at age 55. Why not choose another massive hit then?

But the band’s trademark gang vocals and their leader’s constant exuberance more than made up for those shortcomings. A fun and loose “I’ll Sleep When I’m Dead,” featuring a snippet of The Stones’ “Jumping Jack Flash,” was a prime example.

Pop chart-topper “You Give Love a Bad Name” was dispatched early and went down a storm, as did other big ‘80s hits like extended singalong “Bad Medicine,” rousing “Born to Be My Baby,” spiritual-tinged “Lay Your Hands on Me” and final encores “Wanted Dead or Alive” and “Livin’ on a Prayer.” Sambora's absence was definitely felt on the latter two.

A version of my review originally appeared at ocregister.com
Photos by Matt Masin
Posted by newwavegeo at 11:33 AM