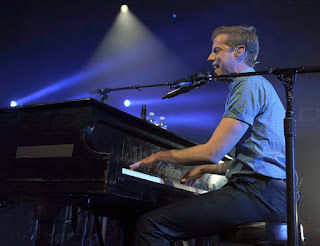 Talk about a perfect launch.
Andrew McMahon in the Wilderness kicked off its North American tour with a fantastic hometown concert Sunday at House of Blues.
Arriving onstage to space shuttle chatter, the band got right down to business and did a spirited “Fire Escape.” The effervescent single is top 10 at alternative radio and getting regular airplay on KROQ/106.7 FM.
That nod to NASA related to the artwork for physical copies of solid second album “Zombies on Broadway,” which was released last month. The cover pictures half of McMahon’s head in a space helmet; he’s also shown wearing a full astronaut suit elsewhere. In interviews, the singer/pianist has said the image “represents who you are, who you want to be and how they meet in the middle.”
New York City played a key role in the album’s creative process. McMahon spent some time there, collaborated with a wider range of songwriters, upped the pop quotient and brought guitars into the mix (they were almost nonexistent on the 2014 self-titled debut).
Here in Anaheim, the vibrant 90-minute, 19-song show encompassed most of the “Zombies” material and half the previous album. A stomping, dramatic “Canyon Moon” saw McMahon briefly go into the crowd, work both sides of the stage and jump atop his instrument (all three activities would be repeated throughout the night).
Before “Walking in My Sleep” and its delightful ascending harmonies, McMahon noted that, as a South O.C. resident, he could drive to the new venue and admitted to being “terrified” about the large (2,200) capacity, “but you sold it out.”
McMahon could barely contain his excitement during a lush “High Dive” and the bubbly “Island Radio.” The crowd roared with approval when a syncopated piano line signaled “Dark Blue,” by McMahon’s previous group Jack’s Mannequin.

A stripped down take on Empire of the Sun’s “Walking on a Dream” described by the front man as an “inspiration for almost every recording session I’ve done since it came out,” utilized simple piano, a lone drum and accordion. Another striking moment came via “Swim,” the dramatic Jack’s Mannequin ballad about McMahon’s battle with cancer (To date, his Dear Jack Foundation has successfully matched 60 bone marrow donors; concertgoers could sign up as potential matches in the House of Blues lobby).
A particularly strong run consisted of an ebullient, synth-laden “Shout Out of a Cannon,” the giddy dance/pop-leaning “So Close” and “Synesthesia.” The latter featured pictures of a space shuttle projected on the space helmet/NYC backdrop and a multi-colored tarp was spread over the crowd; McMahon wrapped it around himself like a cape.
For the encores, McMahon floated across the crowd on an inflated duck (!) during “Don’t Speak for Me,” played harmonica on the uplifting singalong Mannequin tune “La La Lie” and elevated the energy level even more on the gold-selling top 10 hit “Cecilia and the Satellite.” All told, the set was a joy from start to finish. 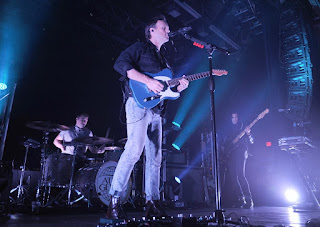 Their dazzling 45-minute opening set spotlighted songs off 2015’s “Inanimate Objects” (“Molecules,” “The Stone Mill”) and 2013’s “When it Was Now” (infectious hit “Trojans,” ‘Electric”), plus a surprisingly effective take on Dead or Alive’s “You Spin Me Round (Like a Record).”

Earlier in the evening, San Louis Obispo alt-rock band Night Riots had no problem captivating the audience, especially with a riveting leader like Travis Hawley. They impressive mightily songs from last year’s sturdy “Love Gloom” album - “Nothing Personal,” “All for You” and “Breaking Free” (which is getting played on Sirius XM’s Alt Nation channel).

As for my first to the new House of Blues, I was very impressed – especially by the décor, crisp sound, overall spaciousness upstairs, very friendly staff and awesome Foundation Room (where I caught acoustic duo Kismit perform credible takes on Florence + the Machine's "The Dog Days Are Over" and The Turtles' "Happy Together" between main stage sets). 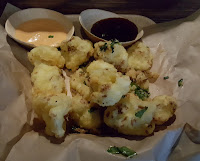 I decided to try out the Market Cauliflower Tempura - Sambal Oelek aioli with ponzu sauce. The fried vegetable was scrumptious and a generous portion. It had a light taste and was quite filling. The ponzu sauce was not too tart, but I pretty much stuck with the cheddar cheese dipping sauce.

Andrew McMahon in the Wilderness opens for Billy Joel at Sun Trust Park in Atlanta on April 28, then returns to Southern California to headline May 3 at The Belasco in Los Angeles (sold out) and May 5 at House of Blues in San Diego (sold out). For the full tour schedule go to www.andrewmcmahon.com

A version of my review originally appeared at ocregister.com
Photos by Kelly Swift
Posted by newwavegeo at 2:32 PM