Marc Broussard gets into children's lullaby and author mode 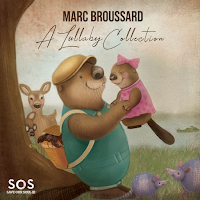 Marc Broussard's upcoming studio album, A Lullaby Collection: SOS III and book, I Love You For You, were created to educate and inspire younger audiences. Available Nov. 15, the collection finds Broussard reimagining a series of classic lullabies -- songs such as “Danny Boy,” “Sweet Baby James,” “Moon River,” "What a Wonderful World" and "Somewhere Over the Rainbow." There are also two Broussard originals, "Bedtime" and "Gavin's Song." Listen to the new single "Godspeed" HERE.

While the songs might be geared to younger ears, Broussard’s signature sound, vocals and orchestration offer a universal appeal for listeners of all ages. “I wanted these songs to be recognizable covers,” he explains. “'Danny Boy' and 'Moon River' were songs I could never imagine recording, but when I did my research and heard the Andy Williams’ renditions, I was so taken. I was never a big Andy Williams fan, but suddenly, I found his voice so spectacular. There’s a grace attached to every one of his performances that I wanted to emulate throughout this entire record. No other artist had ever done that to me.”

The material on A Lullaby Collection is culled from iconic songs Broussard always felt an attachment to. “The initial intention of the SOS series was to share the music that had shaped my life with my younger fans, while being faithful to the spirit of the originals,” Broussard said. “The second album, SOS II: Soul on a Mission, took on a new meaning. I feel that it’s important to use whatever privilege society says I have to help reshape the world around me into something a little more equitable."

Coinciding with the release of his new album, Broussard is making his debut as an author with I Love You For You, a children's book about inclusion, affirmation and appreciation for the special traits that make each one of us unique.

A portion of proceeds from sales of both the album and the book will be donated to Our Lady of the Lake Children’s Hospital in Baton Rouge, Louisiana. As a Louisiana native, this hospital holds a special place in Broussard’s heart, and has changed the lives of children and families from all 64 Louisiana parishes and serves as a beacon of hope and healing for all of Louisiana’s children.

A Lullaby Collection SOS III is Broussard’s third album in his independently released SOS (“Save Our Soul”) series. His first, SOS: Save our Soul, was a collection of R&B classics. The second, SOS II: Soul on a Mission, delved further into the vaults of R&B, soul and rock (released in 2016). Broussard donated 50% of the profits from these albums to City of Refuge, an organization that seeks to lead individuals and families on a journey to self-sufficiency.