Elvis Costello and Blondie, two influential purveyors of new wave music during the late 1970s, arrived in the Inland Empire area for an intimate stop on their co-headlining summer tour.

The Temecula, Calif. concert was held at Pechanga Summit, the largest  entertainment venue at Pechanga Resort & Casino, that opened last year as part of a $300 million expansion project. More than double the size of the long-established Pechanga Theater, the multi-use space has a live music seating capacity of 3,100. This was my first time attending a Summit concert and I was impressed by the room’s acoustics, two large crystal-clear screens and comfortable seats with cup holders in the upper sections.

Blondie has been going strong creatively in the 2010s. The band’s most recent effort was the frequently engaging Pollinator in ’17, which boasted guests like Joan Jett, Johnny Marr and The Strokes’ Nick Valensi. The singles “Fun” and “Long Time” both reached the top 5 on Billboard’s Dance Club Songs chart.

On Friday night, Elvis Costello launched the solid 95-minute, 19-song set in high-energy fashion with 1978 U.K. hit “Pump it Up.” Steve Nieve’s organ work was spirited as ever; the female backing vocalists heard on Look Now, SoCal native Kitten Kuroi and Briana Lee, bolstered the harmonies. A sense of musical mystery enveloped “Clubland” as footage from the original music video was shown on the backdrop.

Costello’s sardonic humor was present throughout the gig. Before “Accidents Will Happen,” he opined whether the Imposters should play the catalogs of Blondie or Oasis instead of their own. “But we don’t want to put you to sleep,” Costello said about the Gallagher Brothers’ music. “Green Shirt,” off 1979’s Armed Forces, contained a memorable swirling organ intro by Nieve and received a rousing response from the large audience.

The British singer provided some interesting background on the newer jazzy tune “Photographs Can Lie.” Whenever “Watching the Detectives” is performed (and it’s usually a staple of the setlists), Costello tends to tweak the music a little. This time was no different, but the familiar shards of tremelo electric guitar were still intact as images from various pulp noir movies from the 1930s and ‘40s were flashed on the backdrop screens.

Before sitting down at a black Steinway piano to play the stately ballad “A Face in the Crowd,” Costello talked about his still-planned musical of the same name. The classic rock ‘n’ roll vibe of “Mystery Dance” and “This Year’s Girl” (with Pete Thomas’ indelible drum work) combined for a strong double shot.

Later, upbeat songs such as “I Can’t Stand Up (For Falling Down),” “High Fidelity” and “Everyday I Write the Book” (with a revamped arrangement) were highlights. All three singers segued into a snippet of Jean Knight’s 1972 R&B track “Mr. Big Stuff” during “Book.” Costello’s had no problem hitting a falsetto vocal note during his popular ballad “Alison,” which closed the main set.

Making the audience work to be rewarded with an encore, Costello pretended to leave the stage. Then he relayed the short history of answer songs in rock ‘n’ roll and went into a lively “Monkey to Man.” Concertgoers who resisted the allure of nearby gambling and stayed the course past 11:30 p.m. were rewarded with fine versions of “(The Angels Wanna Wear My) Red Shoes” and “(What’s So Funny ‘Bout) Peace, Love and Understanding,” complete with peaceful slogans on the screens.

Appearing onstage in Temecula to the sound of an air raid siren and retro computer graphics on screen, Blondie opened the 17-song, 85-minute set with “One Way or Another.” Deborah Harry, clad in a jacket and sunglasses, ad libbed some spoken bits at the end. The dance-inspired “Fun” definitely lived up to its title as modern day nightclub scenes were flashed behind them. 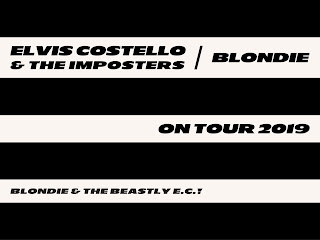 There were plenty of riveting visual elements to the show; especially the footage from Glenn O’Brien’s old NYC public access cable television show TV Party alongside “Call Me.” Powerhouse drummer Clem Burke was a force to be reckoned with on the song and Matt Katz-Bohen got in some keytar action. Taking things down a few notches, Harry fared well vocally on “Sunday Girl,” an early highlight.

The crowd went wild as soon as familiar opening chimes signaled the start of “Rapture.” Chris Stein – the third original member still in the group along with Harry and Burke – played a memorable electric guitar solo while seated (as he was the entire set). Keeping with a similar theme, Blondie covered the current No. 1 single “Old Town Road” by Lil’ Nas X. An extended “The Tide is High” mixed reggae with a heavy rock emphasis, courtesy of lead guitarist Tommy Kessler and the band segued into a snippet of Deee-Lite’s “Groove is in the Heart.”

“We decided to take this one out and dusted it off,” Harry said about the ominous “Orchid Club,” from the original lineup’s swan song album The Hunter. It was a pleasant surprise. Burke’s unique style drew deserved attention amid “Atomic” and “Heart of Glass” (one of the more difficult rhythms in the repertoire to maintain). Here, Harry sang a snatch of Donna Summer and Giorgio Moroder’s “I Feel Love” and it was a perfect choice since Moroder also oversaw “Call Me.”

Come encore time, Blondie returned with the luxurious title track to the James Bond flick “From Russia with Love,” a good fit for Harry vocally. With a subtle wink to the current administration, the U.S. presidential seal was flashed on the screens as it ended. Finally, they capped the set with the gloriously hopeful “Dreaming.”

Costello and the Imposters headline their own Just Trust tour in the U.S. this October and November.