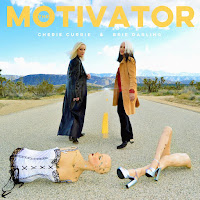 Two pioneering Seventies rockers have joined forces for the first time in the studio and released a studio album. Titled The Motivator on Blue Elan Records, it features lead vocals by Cherie Currie, best known as the original singer for teenage band The Runaways ("Cherry Bomb," "Queens of Noise") and Brie Darling, singer/drummer for Fanny ("Butter Boy," "Charity Ball"), the first all-female band signed to a major label in 1969.

The pair met for the first time in 2017, when Currie was invited to sing on the reunion effort Fanny Walked the Earth and they immediately connected with each other. The Motivator is a real family affair. Brie's husband Dave Darling - who has overseen works by Brian Setzer, Stray Cats, Boxing Gandhis and Meredith Brooks - produced the nine cover songs and three originals and handled some bass and guitar work. Many other family members made musical and creative contributions. Onetime Fanny guitarist Patti Quatro co-wrote one tune and played guitar on another.

For the remakes, Cherie Currie and Brie Darling chose compositions from the 1960s-'80s, many of which still have a socio-political resonance in today's world, such as The Rolling Stones' "Gimme Shelter," The Buffalo Springfield's "For What It's Worth" and John Lennon's "Gimme Some Truth." The collection opens with the fun and punchy title track by T. Rex. It's great to hear the gals wail together on "Shelter," bringing to mind Merry Clayton supporting Mick Jagger back in '69.

You can just tell everyone is having a blast in the studio during The Kinks' "Do it Again," especially when the 11-person-strong backing chorus comprised of "Brady Bunch" actress Susan Olsen and actor Robert Hays, among others, kicks in. Motohead's Phil Campbell even does a spoken word bit. Now there's a motley crew! Elsewhere, Cherie Currie and Brie Darling admirably tackle Stevie Wonder's Higher Ground," Thunderclap Newman's "Something in the Air" and The Youngbloods' "Get Together" with expected vigor.

The original tunes are impressive too: a driving "This is Our Time" boasts cascading vocals, "Too Bruised" is a string arranged ballad and the crunchy, slow burn rocker "I'm Too Good, That's Just Too Bad," with an authoritative Currie lead vocal, bode well for a potential all-new studio album in the future.
Posted by newwavegeo at 2:44 PM