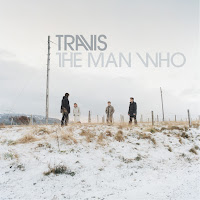 When Travis released its sophomore album The Man Who in the U.K. on May 24, 1999, the whole Britpop phenomenon had pretty much run its course, NuMetal was about to inexplicably break wide open and an unknown act called Coldplay was still to record Parachutes.

By that point, the four Scotsmen in Travis already had a taste of minor success at home, thanks to a handful of top 40 singles from the gold debut disc Good Feeling two years prior. Yet nothing could have prepared the alt-pop band for the juggernaut that became The Man Who.

Co-produced by Mike Hedges (The Cure, Manic Street Preachers) and Nigel Godrich (who was also making Radiohead's Kid A at the time), most of the songs actually pre-dated Good Feeling. The first taste of the new album came via the delicate first single "Writing to Reach You." Then came "Driftwood." Both went top 15. The alt-pop band fared even better with its soon-to-be-signature song "Why Does it Always Rain on Me?" (#10) and "Turn" (#8).

Those hits helped The Man Who sell like gangbusters. At one point, an estimated 1 in 6 British households were reported to have owned a copy (it was certified for sales of 2.5 million copies back in 2010). Multiple awards (BRIT, Ivor Novello) ensued.

Here in America, the album was finally issued in 2000 and Travis attained cult popularity status - enough that after I saw the band open for Oasis at LA's Universal Amphitheatre in April, the guys would be back headlining themselves in October.

Now Craft Recordings/Concord Music Group has put out an impressive 20th anniversary deluxe edition in various configurations, including an expanded version of the original album with a second CD or LP of single B-sides (remember those?) and a special flip-top box set with photo book.

Back in the '90s, I used to voraciously collect import CD singles of Britpop acts. It's great to finally have 19 of them collected together here on the 72-minute B-sides disc. The songs range from live tracks ("Driftwood," "Slide Show," "Where is the Love"), strong non-album songs ("Village Man" has a Mott the Hoople vibe; "High as a Kite" is a riff rocker with gang type backing vocals), U.K. radio sessions and unexpected covers (Britney Spears, The Ronettes, Joni Mitchell, The Band).

An excellent 16-track companion album, Live at Glastonbury '99, recorded at the legendary U.K. festival where Travis drew raves, is also available for the first time on CD, vinyl and digital formats.

Here, frontman Fran Healy provides humorous and thoughtful between-song banter and the band shows it can rock out more than the studio versions. The weather actually turns rainy amid "Why Does it Always Rain on Me" and throughout the show. Healy initially thought the band delivered a poor performance after the festival, but the set gained a reputation among fans as one of Travis' best ever.

Listening back again to The Man Who all these years later, it still stands up and doesn't sound the least bit dated. It helped that Travis only used traditional instruments (guitar/bass/drums/piano) and a string section in the studio.

Melancholic songs such as the gorgeous "Driftwood," delicate-to-wailing buildup on "As You Are" (Andy Dunlop's George Harrison-influenced electric guitar work dazzles), the wistful "Slide Show" (where Healy's vocals were recorded in a car and he namechecks Oasis, Beck and The Manics in the lyrics) are mesmerizing as ever. Other gems: the anthemic "Turn" (Dunlop's maelstrom guitar effect and Healy's passionate singing are amazing) and the sweeping, cello-enriched "Why Does It..."

The physical 2CD configuration of The Man Who is a trifold digipack containing lyrics, a few dozen archival black and white band images taken by Healy's long term partner Nora Kryst and a short note from Healy providing background on the sessions.

All told, The Man Who remains a classic of the era.