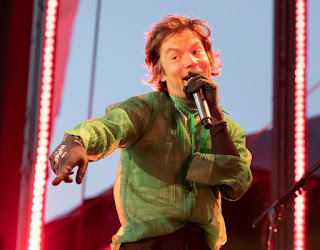 Cage the Elephant did a fiery 75-minute performance in Irvine on Wednesday night - and not just because flames shot up from the stage during a few tunes.

The Nashville-based band, among the most successful at alternative rock radio during the 2010s, is touring behind “Social Cues,” a strong, eclectic album featuring “Night Running,” a reggaefied collaboration with tour co-headliner Beck. A handful of tracks contain orchestration arranged and conducted by David Campbell (Beck's father).

Matt Shultz has a reputation for being a riveting, unpredictable front man akin to Iggy Pop. This writer’s first experience witnessing Cage the Elephant confirmed it. 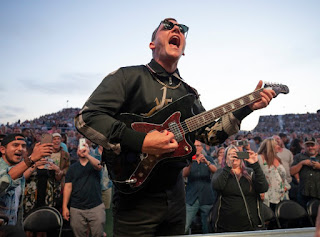 Young fans who packed FivePoint Amphitheatre immediately sang along loudly. Many parents were spotted enjoying the show right along with their kids, possibly due to some Sixties-leaning, classic rock touchstones on “Pretty” and other releases.

The hyperkinetic “Broken Boy,” an early highlight among a half dozen memorable “Cues” songs played, saw Matt prance around and hold the mike stand high in the air. As the evening progressed, he would methodically peel away layers of clothing and wraps. The singer rarely stood still for more than a minute, often working both sides of the stage, pogoing, crawling around and making several forays into the audience.

For “Telescope,” Matt held a flashlight with what looked like a chicken leg duct taped to it, available for casual bites between lyrics. Now there's something you don't see often. All five musicians were in fine form, especially during the dramatic “Too Late to Say Goodbye,” an exhilarating “Mess Around,” acoustic guitar-based “Trouble” (everyone in the venue seemed to join the falsetto howl), “Social Cues” (with a late ‘70s Bowie-esque sonic sheen) and swampy 2008 multi-platinum single “Ain’t No Rest for the Wicked.”

During the frantic closer “Teeth,” Matt had some parting words of wisdom for fans, reminding them that “everyone has value” and “don’t give up on life.” 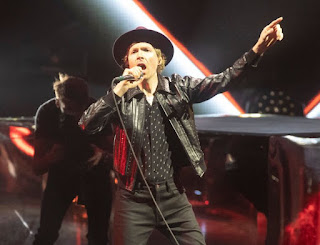 There was a noticeable exodus of people, albeit minor, before Beck took the stage (maybe they had an early workday or weren’t into ‘90s alternative music) to conclude the five-hour concert with a somewhat erratic 60-minute set.
Opening with his first big hit “Loser,” Beck quickly dashed through the verses. Nearly everyone was on their feet and dancing around for the fun R&B-tinged “Up All Night.” With top-notch musicians like guitarist Jason Falkner and keyboardist Roger Joseph Manning Jr. (successful artists/producers in their own right) among the band, well-known numbers like “The New Pollution,” “Devil’s Haircut” and “E-Pro” sounded powerful as ever. The billowy “Wow” (from the last album “Colors”) and sprightly “Girl” were also delightful.

Then things started to go off the rails a bit. Beck forgot the lyrics to “Debra” and the sparse, stately ballad “Lost Cause” (both routinely on past setlists). An attempt to call an audible fell flat.

Yet latest single “Saw Lightning,” a bluesy folk song inspired by Mississippi John Hurt containing some wicked slide guitar, helped lift the pace. So did the dancey helium pop of “Dreams.” The typical set closing medley of “Where It’s At” and various cover snippets (three holdovers from last fall’s tour) was all over the place.

Finally, Matt Shultz joined Beck for a ragged “Night Running” (debuted live the night before and unrehearsed) and a “Where It’s At” reprise. 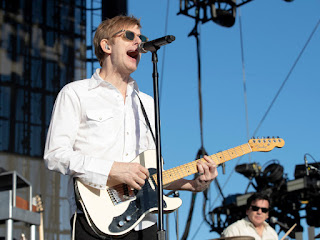 Earlier, indie rock stalwart Spoon delivered an excellent set comprised of many selections from the upcoming career compilation “Everything Hits at Once.” Despite recording for more than 20 years, the Austin-reared band probably had thousands of people doing a Google search for it last spring after a video of 2020 Democratic presidential candidate Pete Buttigieg playing 2003 single “The Way We Get By” on piano went viral. In Irvine, it was a rollicking standout.

Right from the start, Spoon proved enrapturing with some skittering programming and wiry guitars on “Knock Knock Knock.” The shuffling new single “No Bullets Spent” was equally impressive. Singer/guitarist Britt Daniel often held his electric guitar aloft as his bandmates locked into a hypnotic groove (“I Turn My Camera On”) or spacey sounds (“Hot Thoughts,” “Don’t You Evah”). Kudos to multi-instrumentalist Gerardo Larios for pounding the piano backwards during a mariachi-influenced “The Underdog.”

LA rock band Starcrawler did a mildly interesting 25-minute set that bore elements of punk, glam and heavy metal. Guitarist Henri Cash was good, notably on a cover of The Ramones’ “Pet Sematary” from the 2019 film soundtrack. Yet the truly disturbing antics of waifish singer Arrow de Wilde - mock choking herself, spitting “blood” (not sure if it was real) – rendered most of it as forgettable shock rock.

All photos by Sam Gangwer/courtesy SCNG
A version of my review originally appeared at ocregister.com
Posted by newwavegeo at 1:35 PM