Mike Peters personifies the triumph of the human spirit.

Having battled cancer three times, the veteran Welsh singer/guitarist for The Alarm continues to make new music and tour the U.S. and Europe at a steady clip.

Tirelessly promoting his Love Strength Hope cancer foundation and its Get on The List bone marrow donor registry at concerts and fundraising hikes up the highest mountain peaks worldwide, Peters, 60, never seems to stop.

Earlier this year, Prince Charles bestowed upon him the prestigious title MBE (Member of the Most Excellent Order of the British Empire) for those charity efforts.

The Alarm is currently in Southern California, with concerts tonight at House of Blues in San Diego, Friday at Wiens Family Cellars Winery in Temecula and Saturday at ‘80s Weekend #8 at the Microsoft Theater in Los Angeles.

On Sigma, The Alarm’s 12th studio album (give or take a few; the man is so prolific it’s hard to keep track), Peters adeptly channels his health issues into powerful messages of rock ‘n’ roll resiliency. A sequel to last year’s similarly compelling effort Equals (and continuation of the Blood Red and Viral Black album series), Sigma contains a dozen songs that immediately draw your attention. The artist wanted to make “everything bleed emotionally and physically” on this album and definitely succeeded. 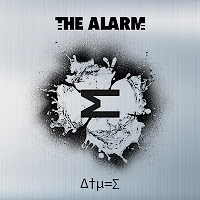 Opening track “Blood Red Viral Black” is an urgent rocker where Peters sings about being “always under attack.” It features blazing electric guitar work by guest Billy Duffy of The Cult and Coloursound and prominent fuzztone basslines from Alarm member James Stevenson.

The psychedelic-tinged “Brighter Than the Sun” and inspiring “Time” are also standouts. On the latter, Peters movingly admits to giving all that he has and advises listeners to do the most with their lives while they still have time, hence the title.

Dave Sharp, founding member of The Alarm’s original 1980s/early ‘90s incarnation, adds his trademark guitar sounds to the insistent “Equals” as his onetime bandmate convincingly sings about how love can heal all divides and take us anywhere, but does not “kill or maim.”

Touching mid-tempo ballad “Heroine” marks the first time Peters has been able to write a straightforward love song to wife and Alarm keyboardist Jules (who also battled cancer) without using some form of poetic license. Key lyrics: “she floats through my veins like blood” and “when tears stream down my face/my love is there for me.”

“Love and Understanding” charges forth like the Alarm of old with a soulful chorus and stirring words like “if I could move the mountains, for you I’d put myself in harm’s way.” Piercing guitars and full-bodied backing vocals propel “Prisoners,” while the CD-only bonus track “The White Count,” bears a distinct melody. As on several “Sigma” songs, they both directly touch upon the cancer experience, referencing blood cells, penetrating skin, radiation machines, ultrasound, staring at gray walls, etc. Heavy stuff.

A 2013 Bob Dylan concert that Peters saw at London’s Royal Albert Hall inspired “Armageddon in the Morning,” a sprawling folk tune (all hail the brief return of the harmonica!) which describes a day in the life and despite a 7-minute-long running time, doesn’t wear out its welcome.