An interview with White Lies

With the North American tour starting on Thursday (see dates below), check out my interview that ran in February...

White Lies made a major mark on the British music scene when its members were still in their late teens. Loaded with sharp post-punk and darkwave sounds that recalled Ultravox, Echo & the Bunnymen, The Killers and Interpol, the band’s compelling 2009 debut album To Lose My Life debuted atop the U.K. charts, spawned two Top 40 pop singles and went gold.

Cave’s lyrics revolve around the human condition; touching upon shattered relationships, social media and being an outsider. Standout tracks include the dramatic and intense 7 ½ minute-long opener “Time to Give,” a propulsive “Never Alone,” the fast-paced, exciting “Believe It” and “Jo.”

Q: This time around, the band tweaked its usual sonic template a bit to include acoustic guitar, Wurlitzer piano, Mellotron, vibraphone and more. What led to that decision?
A: Early on, it was quite obvious to us that acoustic guitar was going to feature pretty heavily on the album. We put it down on some tracks when we started to write them, and it just fit so well. I think it’s good to change things up sometimes...It was really good fun to explore a lot of new things in the studio - especially the piano, because we got an amazing Bebop jazz player in London [Gabriel Latchin] on a couple songs. I play some piano on the record, but all the really jazzy improvisational stuff is played by him.

Q: Haven’t you taken piano lessons in recent years to step up your musical game?
A: I have, yeah. I really love early classical music and spend a lot of time doing it. But that doesn’t necessarily fit well on a pop record. You never know: maybe one day, we’ll write some baroque music.

Q: You’ve said that playing different synthesizers on White Lies albums is like being a kid with a new toy. Were a lot of them utilized again on “Five?”
A: This album feels more organic, with more acoustic instruments than the last one. The first studio we were in was co-owned by Flood and has a really great Roland modular system. We played around for a while on that and did some processing. We used a lot of Minimoog; we love that sound and the Prophet 6 [polyphonic analog synth]. I’ve got one of those at home as well.

Q: Charles described the buoyant first single “Tokyo,” where various cities are namechecked, “a breakup story from the point of view of an idiot who can’t understand what’s gone wrong.” What did you think of the lyrics he came up with for this album?
A: He has this great ability to fit words to all these weird strange melodic lines. He can just make it work so quickly. I think it’s an amazing talent. I’m very jealous and envious. I’ve never been able to write words myself. Charles is great at distilling how he’s feeling.

Q: “Time to Give” has a Gary Numan-meets-Kraftwerk vibe. What was your mindset in creating the tune?
A: That is a real step up for us. With the ascending melody at the end and the keys constantly stepping up and changing, I think we were inspired to do something a bit different and weird. Maybe that mentality comes from listening to a lot of prog rock and just trying to do things that are really out there.

Q: Speaking of prog-rock, “Kick Me” contains an airy Pink Floyd-type interlude. On another other end of the rock spectrum, “Fire and Wings” incorporates Nirvana-esque guitar squalls.
A: Those are songs that I don’t think we’d have been able to write 10 years ago or even five years ago. We felt really pleased and confident about putting them on the album. They are different and there are a few surprises like that on the record for our fans..A lot of the songs touch on our past and our old material. Then there’s weird moments like you mentioned that are unexpected. It’s nice to have that variance.

Q: Early in your career, the band was sometimes compared to Joy Division. When asked about influences back then, you’d reply that you never listened to that band. Now you’ve admitted to being inspired by Joy Division and New Order while making the new album. Did maturity increase your appreciation for those legendary groups?
A: I think that’s true and it happened gradually over the years. There was definitely a period of time when we didn’t listen to an enormous amount of their music and tried to actually pull ourselves away from anything that sounded like that. But there are a few touch points on our first record that really do sound like that era of music and those kind of bands...At the time, I think we were listening more to bands that were listening to that music – like Interpol, early Killers. We were so into those bands growing up. I think that’s where it filtered down to us through. It’s great to revisit that stuff. Joy Division and New Order are both amazing bands. 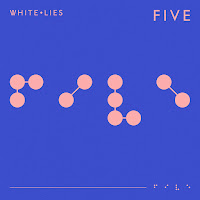 Q: The artwork concept for the physical formats of “Five” is visually striking.
A: We knew we wanted a graphic design rather than a photograph or a painting - the kind of thing we’ve done a lot previously. We were thinking about the New Order-era with Factory Records and those record covers from Manchester.

Q: All the classic ones overseen by Peter Seville.
A: Yeah. They were so vivid and bold. We wanted to do something like that – really minimal but striking. Charles was scrolling through fonts on a website and their meanings. Then he said, ‘How about we try this?’ The designer came up with some great visuals. It’s meant to be a way for people to understand how braille works, but it’s not technically braille. We quite like that. It’s kind of mysterious and intriguing.

Q: The video to “Tokyo” that you shot in Tijuana with Ariel Award-winning Mexican film director David Pablo is very bizarre. He really has a unique vision.
A: Completely. That’s all David. He’s amazing. If we’re ever given the opportunity to go back to Tijuana, we’ll always take it. I made a video for our previous album there with him. That was the reason we were keen to work with him again. I think he has really nebulous ideas that are so wild. You see how it connects to the music...I love collaborating with him. Every time we do, it’s such an adventure. You see the city from his perspective. He loves the city that he grew up in so much, he wants people to see all sides to it. Show all the kinds of people who live there and what they do. He’s so passionate about it. It’s a wonderful place and really strange.

Q: What is the story behind the mermaid house you guys are seen sitting on top of at the end of the video? Is it some kind of tourist attraction there?
A: Surprisingly, it’s not. It’s out of the way, in this suburban neighborhood. I’m assuming the planning laws are pretty relaxed in that part of Mexico [since the mermaid is a naked woman]. The house is so weird. It’s enormous. You can see it from all the streets around it. One of the great things about that part of the world is you just come across these mad ideas people had, and they’ve been able to execute them because they can.

Q: Considering White Lies’ career over the past decade, do you think you’ve been able to craft a distinctive sound?
A: Yeah. I think that’s one of the big advantages of continuing. With all the records we’ve had, there’s always little touch points you can find that really encapsulate the sound of your band. Then you can use them again in the writing and recording process. For example, it sounds ridiculously simple, but chugging on a guitar with little stabs here and there. Stuff like that has really become associated with the sound of our band. It’s one of the small parts that makes it sound like White Lies. We do have a bit of a formula there...I think we’ve grown as musicians and I feel I’ve grown as a singer over the years. Especially working with someone like Ed Bueller. He really tries to get more out of the vocal performance and always reminds me in the studio, when delivering vocal takes, they need to be a performance. You almost need to act them out and really get your mind into the lyrics and think about what they mean to you. Try and reflect that in the way you sing.

You also need to be quite vulnerable and fragile sometimes. As a teenager, you don’t think about things like that. You just do what you feel is natural. More recently, I’ve thought about that a lot more. I was really happy with the vocals on this album. For me personally, I feel they’re the best vocals I’ve ever done.

My interview originally appeared at prohbtd.com
Posted by newwavegeo at 6:42 PM