An interview with Sara Quin of Tegan and Sara


Having formed as teenagers in the late ‘90s, Tegan and Sara put out second album “This Business of Ours” via Vapor Records (run by Neil Young’s manager) in 2000.

Four years later, the siblings received a gold record and Juno Award nomination for “So Jealous” in Canada.

Moving into a pop-oriented direction for 2012’s jubilant “Closer” resulted in their first big Stateside hit.

It went gold, topped the dance chart and helped alluring album “Heartthrob” sell more than 200,000 copies with opening stints for fun. and Katy Perry. Then they finally won three Junos.

A collaboration with The Lonely Island on the platinum-selling “Everything is Awesome” from “The Lego Movie” soundtrack in ’14 was nominated for an Academy Award and drew a whole new crop of fans. Sara Quin said even people who don’t recognize their name know that tune.

“It was such a fun experience," she related in a recent phone interview from her home in LA. "We learned so much. It was cool and weird to go and perform it at the Oscars. That is something we’ll never forget. I’m also glad it didn’t define our career either.”

Tegan and Sara’s impressive 2016 album “Love You to Death” saw them team up with producer Greg Kurstin again. This past February, he won Grammys for his work on it plus releases by Adele, Sia and Ellie Goulding. 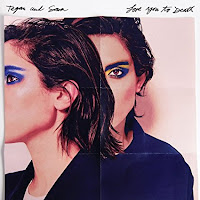 “Greg was really careful to make sure he didn’t sanitize the songs from what makes them Tegan and Sara…He made a landscape out of what we had already done. I really appreciated that. I feel he really gets that each artist has their own DNA and if you remove that, the song isn’t really going to sound like them. I was so proud of him.”

Music videos were done for all the recent tracks, with a puppet-based homage to 1980s TV series “Miami Vice” (“Dying to Know”) and a vibrant visual ode to L.A. streets (“U-Turn”) being two of the most ingenious.

“I’m super happy with how they all turned out,” said Quin. “The best part of doing all those videos was getting to work with so many cool artists. We really made an effort to engineer 10 really different pieces from people whose vision we admired.”

Soon, the women will mark the 10th anniversary of seminal album “The Con,” with an acoustic tour. Produced by then-Death Cab member Chris Walla, the original CD featured members of The Rentals and AFI. Quin said all the momentum leading up to it – a tour with The Killers, song placements on “Grey’s Anatomy” and The White Stripes covering “Walking with a Ghost” – helped make it a success.

“We were able to capitalize on the new audience that was chomping at the bit, ready to hear what we were doing next.” Tegan and Sara felt “a symbiotic moment between us and the audience that we were performing for. That’s really special. It’s always going to be one of those records that had an impact.”

Although firm details on an upcoming tribute album to “The Con” should be announced soon, Quin said the project was “a way for us to put the focus on [acts] that maybe even some of our fans don’t know. Tegan and I spent a ton of time trying to curate unusual pairings. Instead of letting people pick a song, we thought, ‘Who would be an interesting person to cover it?’”

The tribute album will help draw attention to the Tegan and Sara Foundation. Launched last year, it focuses on “economic justice, health and representation for LGBTQ women and girls.” A portion of proceeds from “The Con: X” tour and album will go to the organization. Additionally, Tegan and Sara return here when Mothership – A Women’s Festival and Retreat takes place in Thermal on Oct. 13-15 in conjunction with TASF.

A version of my interview originally appeared in SCNG newspapers.
Posted by newwavegeo at 7:14 AM