Next up in the Phil Collins catalog reissue series: live albums 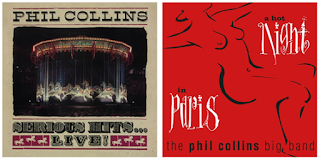 Phil Collins continues his successful reissue campaign with remastered versions of two classic live albums. Serious Hits…Live! and A Hot Night in Paris will both be released on February 1 via Atlantic/Rhino.

The two albums follow a rediscovery and re-evaluation of his back catalog with the high profile "Take A Look At Me Now" reissue campaign. He subsequently released The Singles collection and delved into the archives for his collaborations compilation Plays Well With Others. Phil Collins is proving as popular as ever in the live arena too. Having just completed a successful North American tour, his Not Dead Yet Live! show heads to Australia and New Zealand in mid-January.

One of the most successful live albums of all-time, SERIOUS HITS… LIVE! was released in 1990 and has been certified 4x Platinum by the RIAA in recognition of over 4 million copies sold. The album was recorded at various stadium and arena shows throughout his seven-month Seriously, Live! World Tour. It includes performances of many of his huge hits including "In The Air Tonight," "You Can’t Hurry Love," "Against All Odds (Take A Look At Me Now)," "Easy Lover" (with Philip Bailey) and "Another Day In Paradise."

In contrast, 1999’s A HOT NIGHT IN PARIS focused on jazzy instrumental performances of select songs from his solo discography as well as his work with Genesis. With Collins on drums, the album also finds The Phil Collins Big Band playing select covers such as Miles Davis’s "Milestones" and an extended jam of The Average White Band’s "Pick Up The Pieces."

Both albums will be released on CD, digital and vinyl formats, with A HOT NIGHT IN PARIS making its vinyl debut.