An Evening with Steven Van Zandt at Grammy Museum 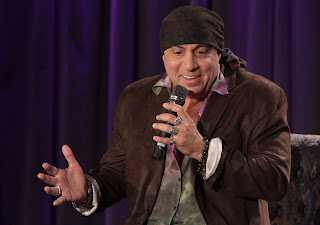 From serving as Bruce Springsteen's longtime music partner in the E Street Band and Underground Garage radio host to activist and actor on HBO's "The Sopranos," Steven Van Zandt has maintained a multi-faceted career for nearly five decades.

On Monday night, he discussed all that work and more during a rare sit-down at the Grammy Museum in downtown Los Angeles.

It was moderated by the museum's executive director Robert Santelli - a former New Jersey music journalist and author of Springsteen books with a long history of covering the rocker.

Also in attendance in LA were two musicians with ties to Jersey: Blondie drummer Clem Burke and current Breakfast with the Beatles/Underground Garage radio show host Chris Carter (during the '90s, the pair were bandmates in Dramarama).

Since 2015 marked the 40th anniversary of "Born to Run," the sold out 95-minute program (including audience Q&A) began with Van Zandt reminiscing about making the landmark album. "It was a special record and Bruce was making a statement," he said. "Back in the '70s, it was uncool and courageous to have the sax" play a prominent role in a band. "But tradition mattered to him." Then he recounted the popular story about how did helped guide the horn arrangement on "Tenth Avenue Freeze Out" without any formal training.

Santelli asked about Van Zandt's stint with Southside Johnny & the Jukes. At the time, all the other bands playing Jersey Shore clubs like The Stone Pony did covers. "We played original songs, which was unusual." Onstage, Van Zandt would sometimes say his songs were by another successful artist instead. "Back then until now, I never fit into the modern world. I create my own world. We do it today with 'Underground Garage.'"

About his formative music influences, Van Zandt said, "The British Invasion was everything to me," citing The Beatles appearance on "The Ed Sullivan Show" and how they popularized the idea of the band as a fully creative entity (while acknowledging predecessor Buddy Holly & the Crickets). "The Beatles all had nice outfits and haircuts. Then the Stones came along, weren't so nice and made it look easy. I thought,  'I could do that.'"

Flashing forward, Van Zandt said Springsteen asked him to co-produce "The River" album to help get a full live band sound. Then on 1984's "Born in the U.S.A.," they eschewed studio overdubs in favor of playing entire songs again and again. "I did the mandolin solo in my vocal mic."

Regarding "The Sopranos," Van Zandt talked about how producer/creator David Chase had seen him induct The Rascals during the televised Rock 'n' Roll Hall of Fame ceremony and insisted he should accept an acting role on his new mobster drama. In the 1990s, Van Zandt was at low ebb musically. "I didn't relate to anything about grunge," so the TV opportunity came at a good time in his life.

A fascinating part of the discussion centered on Van Zandt's creation of Artists United Against Apartheid in 1985. He had gone down to South Africa twice the previous year and felt "I needed to bring attention to the problem. I wanted to get a cultural boycott." Although 49 acts participated in benefit song "Sun City," he said only a few people turned him down, including Frank Zappa.

"Radio wouldn't play the song, but MTV and BET aired the video." The uprising eventually led to South African bank sanctions and Nelson Mandela being released from jail. "We couldn't do it now," said Van Zandt.

He said today's music is mired in mediocrity. The Underground Garage show and station on SiriusXM radio are about "getting the standards back up. Everything gets diluted the further you get from the source" of rock 'n' roll. "We plant as many seeds as we can" on the show (which launched in 2002). "You get great music 24 hours a day" on the channel. 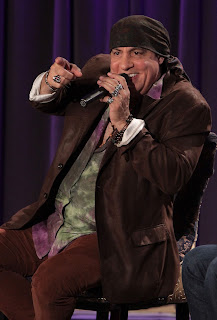 The audience Q&A portion saw Van Zandt touch upon a variety of other subjects (and go over the allotted time), including...

All the great songs left off "The River":

Reuniting The Rascals and the Broadway show he spearheaded:

"No one person is more important than others in a band...Felix (Cavaliere) caused all the problems."

How he felt when the E Street Band broke up and how things are now:

"If you have a band with that kind of chemistry, you should never break up...that last tour was one of our best ever. We broke four new markets around the world with little promotion. We still have unfinished business left."

"All 40 years of my music knowledge went into it...I couldn't deal with the injustice of not hearing this woman sing. Greatness is not supported enough in this world."

All photos by Rebecca Sapp, wireimage.com, courtesy of the Grammy Museum
My report also appeared at www.musicnewsnashville.com
For more information on the museum programs and more, go to www.grammymuseum.org
Posted by newwavegeo at 8:39 AM 2 comments: Links to this post 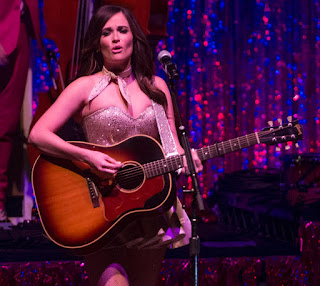 Kacey Musgraves is definitely the real deal. She has an independent spirit that’s rare in country music these days.

It reached the top 10, went platinum and won a Grammy. More awards and success followed, especially for equally taboo track “Follow Your Arrow,” about outdated family values. They helped draw a progressive-minded audience.

A wide variety of fans attended Friday night’s sold out show at the Wiltern and sang along loudly to nearly everything. Most of the 90-minute main set was culled from Musgraves’ equally solid new album “Pageant Material,” which basically picks up where the last release left off. She co-produced and co-wrote all the autobiographical tunes, recorded them live and used a string section to enhance the organic, 1960s-style sound.

The stage design for this Country & Western Rhinestone Revue tour featured a shiny red curtain and tinsel (like the album cover), while the male musicians were decked out in nifty matching hot pink suits with lights attached. Musgraves wore a rhinestone-studded top, miniskirt and boots. 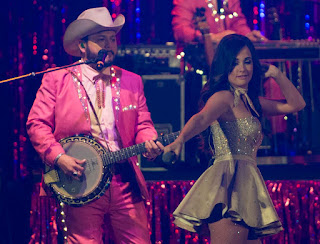 Opening with an easygoing “Pageant Material,” Musgraves put down her acoustic guitar for “Step Off” and pranced around the stage as she sang. “Mama's Broken Heart,” co-penned by Musgraves and a hit for Miranda Lambert, had attitude aplenty and was an early highlight.

“Dime Store Cowgirl,” which references Southern California locales (key lyric: “you can't take the country out of me”) and on which Musgraves played her silver Gretsch Bigsby electric guitar, was another strong one.

The singer provided background on a few songs, made jokes about booze and weed, let her bandmates display their quirky talents and even introduced her new puppy (rescued from a Washington state shelter). Meanwhile, the band played unobtrusively, letting Musgraves’ plaintive vocals shine. Their acoustic segment, including the down home humor of “Family is Family” and “Stupid,” plus Musgraves' solo turn on “Merry Go ’Round,” all worked well.

Later, mild country rockers “Blowin' Smoke” and “Die Fun” (about living life to the fullest) and “Follow Your Arrow” all got the expected wild responses. Musgraves ended with a frisky, smoldering take on Nancy Sinatra's “These Boots are Made for Walking.” And that's just what she did – all across the stage.

My review originally appeared at ocregister.com
All photos by Miguel Vasconcellos

Posted by newwavegeo at 11:42 AM No comments: Links to this post 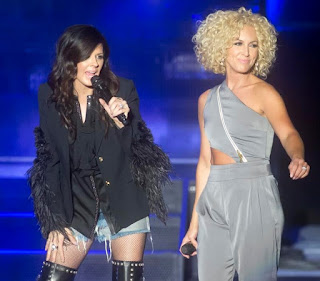 Halfway through Little Big Town's Greek Theatre show on Thursday night, the humidity level was unusually high and singer Karen Fairchild (pictured, far left) joked that she never thought about removing her clothes onstage before then.

Plenty of sizzle seeped into the excellent 90-minute performance, which was heavily weighted toward last year's nuanced "Pain Killer" album.

Originally hailing from Alabama, the quartet continually finds fresh ways to expand their trademark male/female vocal blend. Their long career has reached the loftiest of heights in recent years. When the Country Music Award nominations were announced earlier this week, Little Big Town tied for the most of any artist.

In Los Angeles, they got right down to business. An extended military march beat intro built anticipation. Then LBT slowly emerged from behind the backing band and kicked off the 22-song set with big whistle-driven hit “Day Drinking.” Fairchild and Kimberly Schlapman seamlessly sang the humorous “Quit Breaking Up with Me” together as the guys laid down a slinky twang.

The bluesy gospel of “Front Porch Thing” was riveting (the same held true for spirited, similar-minded tunes like top 10 hit “Little White Church” and “Pavement Ends”). Bolstered by a three-man horn section, plus LBT’s Phillip Sweet on organ, the reggae-tinged “Pain Killer” came across like a breezy delight and provided an early example of those tight harmonies.

Sweet played Dobro during the Lindsey Buckingham-esque “Bones” (from 2005’s “The Road to Here”) and moved to piano for an equally haunting “Faster Gun,” peppered by Wild West lyrical imagery.

Before her gentle lead vocal turn on “Sober,” Schlapman said, “We thought we'd never get here,” referring to Jimi Westbrook’s vocal cord surgery over the summer, which necessitated The Greek and other gigs to be postponed or canceled. The soulful acoustic-based love song “Bring it on Home” was a real crowd pleaser. 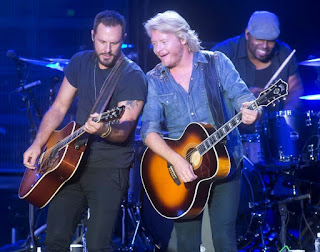 Westbrook (pictured, far left) sounded fine throughout the night, especially alongside real-life wife Fairchild during dramatic duet “Your Side of the Bed.” She continued to shine for a pair of sultry rockers including “Turn the Lights On.”

Rising SoCal singer/songwriter Tori Kelly joined the group for an acoustic take on her own current pop hit “Should've Been Us.” Then the LBT ladies dazzled again with powerful lead deliveries amid “Save Your Sin” and the title track to 2012's platinum album “Tornado.” Here Fairchild donned a black cape, a fan rotated behind her and storm images were projected, making quite an impact.

Ashley Monroe was overjoyed to be celebrating her birthday with an inaugural Greek appearance. Probably best known as a member of the Pistol Annies alongside Miranda Lambert and a No. 1 duet with Blake Shelton ("Lonely Tonight"), she recently put out third solo album "The Blade."

During an inviting 40-minute opening set, Monroe delved into that lush countrypolitan-leaning collection that was co-produced by Vince Gill and features all-star guest appearances. 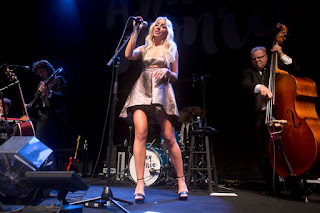 Accompanied by a four-piece band in suits, Monroe's pure voice recalled Tammy Wynette during “If the Devil Don't Want Me.”

A chatty crowd missed the affecting “Like a Rose,” “Dixie” and “Has Anybody Ever Told You” (shades of Lee Ann Womack), but finally paid closer attention to the upbeat “Onto Something Good,” her own bright take on the Lambert hit she co-wrote, “Heart Like Mine” and the fun, barrelhouse piano number “Winning Streak.”

My review originally appeared at ocregister.com
Photos by Armando Brown

Posted by newwavegeo at 9:27 PM No comments: Links to this post