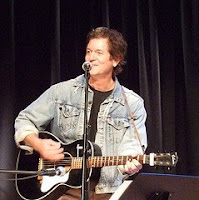 Rodney Crowell plays the Belly Up in Solana Beach on Nov. 19 and Largo in L.A. on Nov. 20. His latest CD "Sex & Gasoline" is out now on Yep Roc Records. We talked a couple weeks ago from his home in Tennessee. My feature article can be viewed at www.nctimes.com/entertainment

What can fans look forward to at the shows? It’s an acoustic trio format, right?
This is different from when I’ve been through there with my band before. It’s myself with another guitarist/keyboard combo and a classically-trained violinist who has been working with me. She’s a violinist who can also play fiddle. Been doing it since September. Musically, it’s very enjoyable; satisfying for me. I really like the format. It was a certain kind of vision I had for how I wanted to perform at this particular time.

You’ve said you thought 2001's “The Houston Kid” was a reinvention of sorts. Did you find yourself on more of a creative tear once the new millenium came along?
Well, I took five years off. Four of that to dismantle a way of doing things I found to not be really serving me, so I actually took five years off and lived very quietly. Made very few public appearances. Getting kids ready for school. Did things like that so when the wind picked back up inside to go back to work, certainly in the public sense, there was more of, ‘how could I be true to my own sensibility?’ What I’m saying is, I really got less interested in really broad strokes and popular music. I got more interested in how I was gonna really honor my own particular sensibility and hopefully create an ongoing conversation with an audience.

Did you find more detailed life experiences filtering into the songs?
Oh, far more [emphatically]. That comes from insisting that the basis for what I’m doing is giving voice to my own particular sensibility. On one hand, it becomes less broad stroke and less mainstream, but by the same token, it intensifies the quality of the relationship between me and the audience.

Social commentary has been part of your lyrics on the past couple albums. What is your take on politics these days?
In the 2004 election, I was traveling abroad and looking at it, most of that election season I was in Europe. My record “The Outsider” was more from the point of view of an expatriate. I feel that the topical, political observation has a very short shelf life. While there was a period where I was really motivated to do that work, I find myself drifting away from it. I’m not compelled anymore to make it a part of my monologue or the dialogue. But I’ve had people say to me that there is some cultural observation in “Sex & Gasoline.” There is, but from where I sit, it’s not so much about politics as about cultural projection – specifically on young women.

The role of women in today’s society is a minor theme in a few of the new songs.
Yes and a major one there. The song “Sex & Gasoline” is entirely born off of watching someone I cared so deeply for struggle to find her place and indeed her sexual relevance in modern culture… that part of our culture - the Size 0 - and sexual icons that are made famous, not for the quality or the content of their personhood or contribution to art or culture, strictly because they’re Size 0, long-legged and beautiful. For us, it’s not a great message for young women. That song addresses middle aged women as well. Not only if you’re 19 and not Size 0 and a sex goddess you’re irrelevant in the culture, but also it’s the 43-year-old women who helped a man build a life that gets traded in on a new model. I’ve watched it happen.

Did you have Hillary Clinton in mind on “The Rise and Fall of Intelligent Design”? At one point you sing, “If I could be the first woman president.”
Yeah, I was writing that when she announced her presidency. And also around the same time of all that brouhaha about creationism. I was sitting around thinking, ‘is it not possible that God, the benevolent creator of the universe, didn’t also create evolution?’ All the projects I worked on seem to take me a lot of time and care to get it just right. I can’t imagine the world as we know it was in a spontaneous combustion. It takes tinkering. Look at the dinosaurs. That took some tinkering.

On this album, you didn’t co-produce for the first time in awhile. What made you decide to hand over the reigns to Joe Henry?
I finally came to my senses. God, what a treat. I went and made a record with Joe. I showed up at the studio, sang my songs, left and said, ‘just mail me a copy of the record.’ Whereas always before, I sweated bullets over every note on the record.

Did you think, ‘why didn’t I do it this way sooner?'
Oh man, have I ever said that over and over – why? Duh, man. How slow am I on the uptake?

How did you discover Joe Henry?
Through his music. We also have a mutual manager. We all hooked up for dinner and Joe and I clicked. He’s a great soul, a really sensitive artist and a really quality human being. I love the conversation we were having and wanted to continue it in the studio.

I really dig his atmospheric sound where the singer almost seems to be emerging from the shadows and everything is understated. Is that the vibe you both were after?
I was going after playing and singing as good as I could. I too enjoyed that part of Joe’s work. ‘Coming out of the shadows’ is a good way to put it. With producers, it’s like photography – ‘how do you frame it? How do you develop this picture?’ So I thought, ‘if I’m going to step out of view, I want to be playing and singing really well.’ I had total faith and trust in Joe, so I just really took care of my own work. It was good for me. If I run off and think I’m going to produce any more of my records, I should be shot.

Was doing it quickly a good way of working for you?
That was a good way for me because the focus was entirely on performing…I always thought I was at my best when performing, but why wasn’t I getting that on the record? I made some pretty good records. Still, there was something more about what I was able to capture just in a live performance. I certainly could not go looking for that and produce myself. To be producing is that one step removed from objectivity. In this case, it was entirely a subjective process. I left the objectivity to Joe.

Did you play in the studio with the other musicians?
Yeah, that music is all live. That’s what we played and sang. It’s great playing. We overdubbed some background vocals and that’s really it.

Had you recorded with Phil Everly before? What was that like?
I had not recorded with him before. That was just a lovely day. I called him and he came out of retirement to do that. He’s a very charming man, first and foremost. When he came out, he said, ‘look, I’m retired.’ He hadn’t been singing a lot…it was a delightful afternoon. I really enjoyed that process and I’m really thankful.

How did “I’ve Done Everything I Can” end up a duet of sorts between you and Joe?
It’s actually a three-way conversation between me and the young woman I’m speaking to. We discussed the words I’d written sounded like the conscious mind or a good friend talking to him. That’s how it evolved that Joe would take that particular narration. That’s one of my favorite tracks on the album, just a lovely conversation and it sounds so good.

"The Night’s Just Right” is a great love song. Did you have your wife Claudia in mind while writing it?
I did. I wrote it to her. I’m still capable of writing the broad stroke love song. Whenever I want to obtain a picture for Claudia, it generally comes out like that.

Was “Closer to Heaven” about how the aging process affects us all?
Somewhat. It seems with each passing day, the choices that I make really tend toward living a spiritual life. The rigid thing outside my family is this spiritual life I lead. I really do like Hummus, you know. I originally wrote it as ‘I don’t like Hummers,’ which I don’t. But that didn’t sing as well. So I changed that line and it’s getting a laugh when I play it live. The attention was to present the early part of the song as a grumpy list of gripes. In spite of the grumpy thing I got goin’ on, I actually feel more connected to the source with each passing year to the point where I purposely wrote the last verse as a switchover from what I was grumpy about to what I really love and was grateful. I wanted to take the listener to a destination.

Switching gears, how is your memoir coming along?
I’ve taught myself how to write. Now I’m learning what it takes to get a manuscript ready to publish. It’s work. I expected it to be a chore because I have friends who are serious writers. I knew what I was getting in for. Now I’m in it, I realize only the strong survive. It takes stamina, courage and being willing to go through those dark nights of the soul in order to get there. I hope I’ve done my work well enough that I don’t have to tear it apart and rewrite it one more time. We shall see. The publishing world is now digesting it and I will start to get feedback on how much more work I have to get it ready.
Posted by newwavegeo at 6:51 PM No comments: Links to this post