While my "American Idol" phone votes on Tuesday night were for Adam Lambert, I'm not really surprised that Kris Allen won the competition on Wednesday. You can never underestimate the power of the Bible Belt. People who initially supported Danny Gokey had to throw their weight toward someone else and it was obvious it would be the other "good old boy" Christian Kris.

Allen is pleasant and better than many other guys who made it to the top 10, but Adam was more daring. But he might end up in a better position in the long run. He doesn't have to record that treacly song written by Kara DioGuardi and can take more chances on his debut album now that he's not totally shackled to 19 Entertainment Management as the winner is.

On the finale, Adam's riveting duet with KISS fit him like a glove. Same went for Kris and Keith Urban. The Cyndi Lauper/Alison pairing was equally effective. As much as I like Rod Stewart, his performance seemed off-kilter and odd without any sort of duet with the contestants.

Who did you want to win and what were your favorite pairings on the last show?
Posted by newwavegeo at 4:05 PM No comments: Links to this post 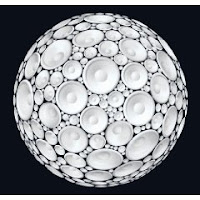 The Crystal Method
Divided by Night
[Tiny e/Universal]
A

Unlike some electronica acts, The Crystal Method strives to make music that feels organic. The Los Angeles-based duo programs with human drum sounds and tweaks other noises to provide a vintage rock, rap or R&B vibe. So far, the approach has had winning results. Arriving out of the early ‘90s rave scene, Ken Jordan and Scott Kirkland immediately struck gold via their 1997 escapist introduction Vegas.

Another solid round of studio collaborators contribute to the invigorating 70+ minute Divided by Night. New Order bassist Peter Hook lends his unmistakable playing to the subtle, Kraftwerkian “Dirty Thirty” and “Blunts & Robots.” Jewish rapper Matisyahu’s exotic chanting and rhymes mesh surprisingly well with percolating rhythms and bleeps on “Drown in the Now.” Ex-Grandaddy leader Jason Lytle is typically understated on the lush dance of “Slipstream.” She Wants Revenge singer Justin Warfield and his wife Stefanie add a barbed darkness to “Kling to the Wreckage” and “Black Rainbows.”

Rounding things out is the slinky Daft Punk-leaning title track and appearances by Emily Haines of hot iTunes band Metric (the sensual “Come Back Clean”) and onetime Hole/Peaches drummer Samantha Maloney. Guaranteed to get your feet moving.
Posted by newwavegeo at 1:35 PM No comments: Links to this post 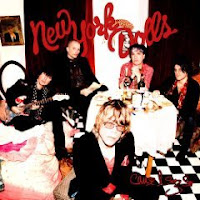 New York Dolls
‘Cause I Sez So
[Atco/Rhino]
A-

When the New York Dolls emerged from NYC in 1971, few people knew what to make of the guys’ brash attitude, androgynous image and ramshackle sound that predated punk. The original lineup released two criminally ignored albums during their first brief incarnation and helped kick-start a local underground scene later to include Blondie, Talking Heads and the Ramones. Future new wave/glam metal bands tore a page from the Dolls’ visual stylebook; everyone from the Sex Pistols and R.E.M. to Dramarama and Morrissey cited them as an influence.

The latter singer – onetime president of the U.K. fan club and Dolls’ biographer - was responsible for the 2004 reunion. One Day it Will Please Us to Remember Even This, the first new music from the reconstituted group (founding members David Johansen and guitarist Sylvain Sylvain) since 1974, arrived two years later. It was an excellent, mature spin on the crash and burn energy of yore.

On current studio effort ‘Cause I Sez So, producer Todd Rundgren returns (he helmed the classic eponymous debut) and helps the band find a satisfying balance between youthful swagger and seasoned life lessons. Signature song “Trash” gets a laid-back reggae revamp. Sylvain and Steve Conte provide wicked dual guitar interplay throughout (a bluesy “This is Ridiculous,” crunching rock maelstrom “Exorcism of Despair,” the barnburning title track, where Johansen sings in a playful rage about intrusive cameras).

Standouts include a pair of haunting tunes (Ennio Morricone-styled “Temptation to Exist,” “Drowning,” a nod to Eric Burdon), plus the feisty rock ‘n’ soul vibe in “Nobody Got No Bizness.” Here, Johansen vamps like only he can. Key line: “watch our style, it’s kicking like a mule.” ‘Nuff said.
Posted by newwavegeo at 1:25 PM No comments: Links to this post

Relient K in Pomona on May 26 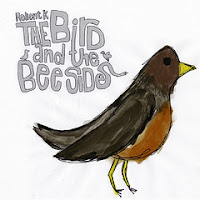 Standing out from the pack at Vans Warped Tour is no mean feat. With massive competition for concertgoers’ attention, every group has to make an instant impression or the crowd will drift off to one of the dozen other stages. Relient K didn’t have that problem during the festival’s Pomona Fairplex stop last summer. Singer/pianist Matt Thiessen frantically pounded the ivories as his bandmates vigorously replicated their blend of acerbic emo and buoyant punk/pop tunes, then threw in a deft Kanye West cover (“Good Life”) for good measure.

Relient K (named after the old Plymouth auto) hails from Ohio, where Thiessen - a Canadian transplant - and lead guitarist Matthew Hoopes met in elementary school. When the Christian band’s self-titled debut disc emerged in 2000, acts like MxPx, P.O.D. and Switchfoot had already paved the way for crossing over to the secular world. A few years later, the K claimed several hit singles on Christian pop radio (“Who I Am Hates Who I’ve Been” broached the mainstream top 40 chart in 2005), MTV airplay, three consecutive gold records, Dove Awards and a Grammy nomination.

Producer du jour Howard Benson helmed 2007’s slick, yet solid Five Score and Seven Years Ago, containing Beach Boys-styled harmonies and an epic tune about a dying man looking back at his life. More recently, the quintet released The Birds and the Bee Sides, a sprawling odds ‘n’ sods collection veering from ska to alt-country sounds and beyond.

I was glad to hear that Coldplay would be giving a free live CD to fans attending the summer U.S. tour. Then today, I was disappointed to find out they were offering it as a free digital download to anyone. Kind of takes the reward out of it for people who spent their hard-earned money on concert tickets. At $100+fees for the top tier, they are no bargain...
Posted by newwavegeo at 5:25 PM No comments: Links to this post

I think a lot of people were surprised that Danny got cut this week from 'Idol.' It should be a very interesting final next week with Adam and Kris.

Randy Jackson got it partially right on "American Idol Extra" (a behind the scenes show on Fox Reality Channel with grating host Jillian Barbarie from the Fox-TV/LA morning news team and ex-"Idol" contestant/hunk Ace Young). Jackson said "on one side you have My Chemical Romance and on the other, Jason Mraz." Kris sort of has a Mraz feel to his music with the acoustic guitar and everything, but doesn't seem to freestyle (at least what we've seen on TV) or have a humorous vibe like Mraz.

Adam will get my votes (yes, I'll be doing some texting). Did you hear that Clay Aiken showed up at the soundstage where "Idol" is taped this week and was apparently escorted off the property? This is from an entertainment blog, so I find it a little hard to believe.
Posted by newwavegeo at 4:31 PM No comments: Links to this post

While Velvet Revolver/GnR guitarist Slash turned out to be a useless mentor this week on "Idol" when he took the final four to the Roxy in West Hollywood, it was great to see the theme devoted to classic rock.

Adam nailed Led Zep's "Whole Lotta Love" - the first time the band allowed one of their songs to be used on the show. I thought for sure he'd have to downplay some of the more sexual lines, but he didn't. Maybe that was in Plant/Page/Jones' useage stipulations.

Kris was just ok on The Beatles' "Come Together" and Danny was just dreadful during Aerosmith's "Dream On." Allison deserved to go after a perfunctory "Cry Baby" by Janis Joplin. On the other hand, her duet with Adam on Foghat's "Slow Ride" sizzled. And Danny & Kris' take on Styx's "Renegade" was good. Another nonsensical critique came from Kara (she's rivaling Paula Abdul lately), who said Danny should've gone for early Aerosmith, like "Crazy" or "Cryin." Those are from the '90s. The song he did was from the '70s. Duh.

For the results show, Paula flogged her new song ("the first time she's done this on our stage" according to Ryan) and it was a bit of sensory overload. The song was just passable (not that she was ever a great singer) and it seemed like she was trying too hard to remind us of her choreographer credentials.

Daughtry returned to debut his new single, which also felt kinda flat. But hey, he actually smiled when chatting with Ryan afterward. No Doubt was plain awful, almost like they didn't rehearse. Gwen's hairdo was horrible and her vocals, odd. Good to see drummer Adrian Young was still doing his best to shock people in that tutu.
Posted by newwavegeo at 3:49 PM No comments: Links to this post

I've never been a Cat Stevens fan, but I sure won't become one after reading that the singer (now known as Yusef Islam) might jump on the Coldplay lawsuit bandwagon concerning one of his old obscure songs, "depending on how Joe Satriani does."
Posted by newwavegeo at 3:44 PM No comments: Links to this post

Talk about a dumb choice of celebrity mentor on "Idol" last Tuesday. For Rat Pack/standards theme week, Jamie Foxx - an R&B singer/comedian/actor who portrayed Ray Charles in "Ray" - got the nod. Made about as much sense as having director Quentin Tarantino for movie soundtrack tunes week (his only really successful/acclaimed soundtrack was "Pulp Fiction").

In Foxx's case, the reason probably had to do with his current No. 1 R&B chart single (not Billboard's Hot 100 as Ryan Seacrest mistakenly alluded to on air) and new movie ("The Soloist") in theaters. How tacky was it when Foxx mentioned his film after he performed and Seacrest apparently forgot? Tarantino probably wanted people to remember he was still around since "Inglorious Basterds" hits theaters this summer.

As for the elimination, Alison needs to get cut immediately. Matt should've hung around for at least another week. While I'm not a Natalie Cole fan, it was nice to see her looking fit and happy on the performance show (and "American Idol Extra"), considering her recent serious health problems.
Posted by newwavegeo at 11:52 AM No comments: Links to this post