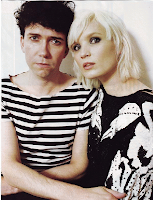 My interview originally appeared in IE Weekly. The Raveonettes play at the Glass House in Pomona on Saturday.

The Raveonettes worship at the musical altar of early 1960s girl group pop and Eighties white noise merchant Jesus & Mary Chain, but some people might be surprised to find they also revere a seminal punk group from the decade in between.

“The Ramones are definitely one of my favorite bands of all time,” says guitarist/singer/songwriter Sune Rose Wagner, in a phone interview from Seattle.

On fourth full-length album In and Out of Control, the Danish alt-rock duo name checks Joey and company, as well as “Rockaway Beach” during the noisy track “Gone Forever.”

“It just has that New York vibe to it that the Ramones always did really well. That’s why I mention them in the song itself.” Although Wagner resides in Gotham (vocalist/bassist Sharrin Foo lives in L.A.) and new song “Suicide” references both the Brooklyn Bridge and East River, the locale wasn’t a major influence.

“I get inspired by anywhere in the world, really. I travel all the time. I’m not in New York that often.” For last year’s spooky, droning Lust Lust Lust, The Raveonettes took the D.I.Y. route. It was the pair’s first release on indie label Vice Records and sold more than their Columbia Records output combined.

Wagner makes no apologies for spiffing up the band’s reverb-heavy sonic template for massive consumption in ‘05. “I have no regrets about any of the albums. They’re all brilliant. I have no favorites…they all work in [their own ways].”

Creating Control involved a trip back to Copenhagen to hook up with producer/songwriter and “old friend” Thomas Troelsen (DFA, Junior Senior), who was “really good at getting us out of our comfort zone,” explains Wagner. “We tried to experiment and sing a little more.”

Yet the process was a struggle because the musicians had no clue which direction to take while Troelsen insisted on short work days and weekends off. They ended up treating each song individually instead of seeking a common thread for the album.

Hardcore fans got an early listen to a few demos posted to Twitter. Wagner says the experiment went “really well. It wasn’t like we asked for help or anything. We just threw them on there so people could hear where we were in the process – to sort of give them a ‘heads up’ where we were going.”

Among the picks to click are blissful opener “Bang!,” the spiraling warped humor of “Breaking Into Cars” and the fatalistic, yet soothing first single “Last Dance” (one of two selections about drug addiction; it deserves heavy rotation at modern rock radio).

Then there’s the aforementioned Shangri-La’s-styled “Suicide,” where Foo’s breathy vocals surround hard-hitting couplets. Wagner calls the lyrics some of the Raveonettes’ harshest, most evil to date. They’re “about rape, violence, lost love, suicide, not giving a shit about what other people think of you and most importantly – being mad and angelic.”

He tends to hang around people with messed up lives. “I just wrote about my friends instead of myself this time around. It felt good doing that [for a change], actually.”

The current tour features The Raveonettes as a four-piece onstage. Wagner and Foo are mulling over an acoustic live jaunt upon returning to America in 2010.
Posted by newwavegeo at 5:10 PM