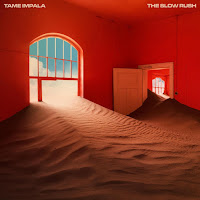 Last spring, I got to see the band for the first time and I must say it was a trip! Read the latest info below...

Tame Impala (Kevin Parker) has announced his fourth studio album The Slow Rush will be out Feb. 14 on Interscope. Parker release album track, “It Might Be Time,” which follows the previously released album track, “Borderline.” He also released a single, “Patience,” earlier this year.

The Slow Rush was recorded between Los Angeles and Parker’s studio in his hometown of Fremantle, Australia. The twelve tracks were recorded, produced and mixed by Parker. Fans can pre-order The Slow Rush at tameimpala.com and all major retailers, or with a ticket purchase for the North American tour.

Earlier this year, Parker told the New York Times “A lot of the songs carry this idea of time passing, of seeing your life flash before your eyes, being able to see clearly your life from this point onwards. I’m being swept by this notion of time passing. There’s something really intoxicating about it.”

The album cover was created in collaboration with photographer Neil Krug and features a symbol of humanity all but swallowed whole by the surrounding environment, as though in the blink of an eye.

Next year, Tame Impala will play three shows in California followed by a date in Mexico City:

Tickets for the U.S. dates go on sale Saturday, November 9 at 12pm PST and the Mexico City show is on sale Friday, Nov 8 at 11:00 AM local time.

Tame Impala is Kevin Parker. His last album Currents (Interscope) was released in 2015 earning him a second GRAMMY nomination and RIAA Gold-certification.
Posted by newwavegeo at 10:23 AM