"What an honor it is to spend Valentine's Day with you," said Dierks Bentley, before the life-affirming Top 10 single "Woman, Amen," off his 2018 album The Mountain. The country star also alluded to the special day prior to his passionate delivery of "I Hold On."

The excellent 90-minute, 20-song concert at Citizens Business Bank Arena in Ontario, Calif. opened with rousing recent hit "Burning Man" as the singer hopped around the stage. Hoisting a beer and slapping high fives with fans near the general admission stage area, Bentley mentioned the Inland Empire locale and asked where sun went on the rainy day. Then he started the hedonistic "Somewhere on a Beach."

Bentley prefaced the contemplative "Living" (from The Mountain) by talking about appreciating the small things in life. Family excursion photos were projected behind the backing band. Several songs, such as the moody "Black" and "Riser" almost verged on alt-rock due electric guitar sounds that bore a distinct tone reminiscent of U2's The Edge (no complaints here). 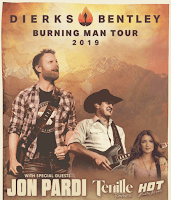 Playing an arena close to a major airport came in handy for Bentley. Earlier that morning, he'd been in Nashville at a music industry event with opening act Jon Pardi (whose terrific 50-minute set provided a sneak preview of a new album due later this year). They apparently returned around 5 p.m. Displaying no signs of jet lag, the headliner was still energetic as ever.

Canadian singer Tenille Towners (another opening act) held her own while serving as Bentley's duet partner on "It's Different for Girls" (in place of Elle King on the recording). Then he walked back to the smaller B-stage while singing "Am I the Only One" and did the usual shotgunning a beer with an obviously stoked male fan.

Switching gears, Bentley performed romantic ballads "Come a Little Closer" and "Say You Do" on acoustic guitar. Pretty much everything else was upbeat crowd pleasers: Pardi joined for fun Dwight Yoakam and Joe Diffie covers; "What Was I Thinking," "Sideways" and encores of "Drunk on a Plane" and "Free and Easy" quickly whipped the near-capacity audience into a frenzy.

The U.S. tour continues, with various breaks, into September. For complete routing, go to dierks.com
Posted by newwavegeo at 8:32 PM