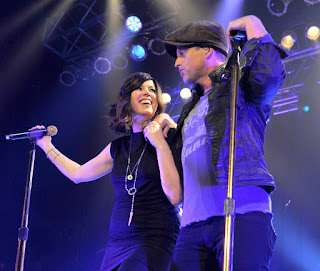 Whenever male and female singers do romantic songs together, you're often left wondering "what if it was real?"

That onstage connection gains authenticity when they are a couple in real life too. Such is the case with Keifer and Shawna Thompson.

Over the past five years, Thompson Square have racked up five top 20 country singles, plus two ACM and CMT Awards.

In Anaheim, Calif., the band delivered an engaging 70-minute performance that ranged from rousing country rockers to riveting ballads. Since the House of Blues concert was being web streamed Thursday night via Yahoo! Screen Live (look for immediate replays at http://screen.yahoo.com/live/event/thompson-square), fans throughout the venue were treated to sharp, close up views of the proceedings on multiple TV monitors.

Thompson Square launched the 13-song set with vibrant hit "I Got You" from its eponymous 2010 debut. The slinky "Just Feels Good" prompted some audience call and response action. A racing "Here's to Being Here" featured a Who-styled guitar intro and perfect lyrics for the occasion: "let's crank it up to 10/live tonight like it's never gonna end." Shawna constantly smiled and like her bandmates, had a good old time.

"Lay it on Me" was the first of four promising new tunes scheduled for a forthcoming studio release. Here Keifer sang about "honeysuckle sugar" kisses to a swampy banjo accompaniment. Another one revolved around small town ways to "raise the roof" outdoors and contained metal-tinged guitars (some songs got a triple axe attack). Keyboard accented "Play with Fire," inspired by the Thompsons' first date, found the pair singing face to face as smoke plumes rose, adding to a palpable sense of sexual tension.

More sensuality arrived amid the dramatic buildup of "I Can't Outrun You." Both singers slowly inched together from opposite stage corners and segued into A Great Big World's "Say Something." Equally intense was the top 10 charter "If I Didn't Have You" with a double guitar solo. Fans sang along loudly and watched the couple embrace at the end.

For the encores, Thompson Square did their latest single "Trans Am," which was propelled by crunchy rock guitars. Keifer introduced their double platinum No. 1 single "Are You Gonna Kiss Me or Not," by proudly boasting "this song's been getting people lucky since 2010 and helped make a lot of babies." The concert closer resulted in one last singalong. 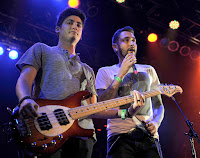 Leaving Austin opened with a satisfactory half hour dose of modern country music.

The Central California band had several young gals clamoring to touch lanky frontman Austin Machado (one almost swiped his ring). "Take Your Breath Away" and "Just My Type," from a 2013 self-titled album, made the biggest impression in OC.

A version of my review originally appeared at ocregister.com.
Photos by Kelly Swift.
Posted by newwavegeo at 9:06 AM