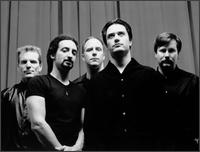 A version of my review originally appeared in the Orange County Register's Soundcheck blog and can be viewed here:

Archival photo, circa 1997, courtesy of Warner/Reprise Records
Faith No More
Hollywood Palladium (Calif.)
Nov. 30, 2010
During Faith No More’s late ‘80s/early ‘90s heyday, Mike Patton often engaged in bizarre antics onstage. For the first of two Hollywood Palladium shows on Tuesday night though, the singer focused on delivering his uniquely twisted vocals while the band remained a tight and energetic force to be reckoned with.
Patton pogoed around and kept the chit chat to a minimum until the group’s breezy take on The Commodores’ “Easy,” an hour into the 90-minute set. Urging some audience participation, he said, “It’s OK to sing along; TMZ isn’t watching you.” Later, there was this unusual taunt: “Who wants to go to jail? Spit on me! I want to feel your happy.”
Longtime fans who packed the sold out venue crowd surfed with abandon and were obviously ecstatic to see the group again after an extended absence. These dates comprise its first Los Angeles appearances since 1997 at the Palace - now Avalon - and Palladium in ’95. I managed to catch both gigs and recall the notorious soup can acoustics inside the latter put a damper on the proceedings.
Last year’s Second Coming tour in 2009 saw Faith No More tour Europe and South America exclusively. The quintet finally returned to SoCal this past April as co-headliner on the second day of Coachella. Watching them give a powerful performance on the festival’s main stage, it was evident how they had influenced such popular ‘90s alt-metal acts as Tool, Deftones, Staind and System of a Down.
That fact was hammered home in the more intimate indoor confines of the Palladium. Despite only a handful of modern and mainstream rock radio hits here, plus a single gold and platinum album, Faith No More continued to find major success abroad before splitting up in ’98. Among those areas were Australia and South America, where the world tour concludes Sunday at a Santiago soccer stadium.
Nowadays, the band’s influence is still being felt. A new remix of “Epic” - crafted by British electronic duo Utah Saints for their recent UK summer festival appearances - was just posted online and can be downloaded free here: soundcloud.com and houseplanet.dj. And a new Faith No More-inspired musical with that same song title is reportedly in the works next spring in Melbourne.
Opening as they did in Indio with a straight, soulful version of Peaches & Herb’s “Reunited,” Patton was clad in his usual red suit, sunglasses and used a cane for dramatic effect. Keyboardist Roddy Bottum served as duet partner.
Then it was time to get the megaphone out. Bottum triggered a siren sound, the musicians went into full on rock attack mode on the frenetic “From Out of Nowhere” and Patton did some screeching and growling.
Rarities from the 1987 pre-Patton album Introduce Yourself (“Spirit,” the stinging and thunderous “Chinese Arithmetic,” prefaced by a snatch of Lady Gaga’s “Poker Face”) surely delighted old school fans. A stellar “Everything’s Ruined,” where Jon Hudson really proved his mettle with distorted guitar sounds and “Helpless,” replete with Patton’s crazy whistling and yelping, made their tour debuts. Actor Danny DeVito even danced across the stage at one point.
Other evening standouts included the sinister “Caffeine” (Patton exorcised his demons to strobe lighting), a funky “Evidence,” the whisper-to-a-scream dynamics and Mike Bordin’s tribal beats on “Midlife Crisis,” Patton’s over-the-top dramatic vocals amid the Bee Gee’s “I Started a Joke” and the always intense “Epic” (here the singer was like a tiger unleashed from a cage).
During the encore section, LA natives Bottom and Gould briefly reminisced about memorable shows they’d seen at the Palladium in the ‘80s (U2, the Clash, English Beat) and the keyboardist got a solo spotlight on a bit of Vangelis’ “Chariots of Fire.” Finally, Patton and the band ended in lounge mode with a crooning cover of Burt Bacharach’s “This Guy’s in Love with You.”
Setlist: Faith No More at the Hollywood Palladium, Nov. 30, 2010
Reunited/From Out of Nowhere/Everything’s Ruined/Caffeine/Evidence/Surprise! You’re Dead!/Poker Face into Chinese Arithmetic/Last Cup of Sorrow/Cuckoo for Caca/Easy/Midlife Crisis/The Gentle Art of Making Enemies/I Started a Joke/Epic/Ashes to Ashes/Just a Man
First encore: Chariots of Fire-Stripsearch/Spirit
Second encore: We Care a Lot/This Guy’s in Love with You
Posted by newwavegeo at 9:26 AM